Storming the Capitol building in Washington DC sets a precedent for freedom-loving people in Venezuela and shows them that they too can defeat communism and globalism, according to one of the riot’s most colorful members.

Will videos like this change the minds of U.S. liberals who support regime change and fascists in Venezuela? (Probably not.) pic.twitter.com/b3Mvf2StfK

The growling-voiced MAGA rebel, who attracted much attention after the Capitol siege, is a voice actor and minor celebrity in Arizona. Jake Angeli has been a prominent fixture of pro-Trump and anti-lockdown rallies since at least 2019.

He was previously interviewed about his belief that a global conspiracy of immoral elites are keeping common people subjugated while researching all kinds of secret technologies in underground bunkers. He was holding a sign saying “Q sent me” – referring to the QAnon conspiracy theory, which he adheres to.

The US political establishment decried the break-in on Capitol Hill as a disgrace. But it is also, remarkably, on the same side as Angeli when it comes to Venezuela.

Juan Guaido received a standing ovation when he appeared at Donald Trump’s State of the Union address last February, praised by Republicans and Democrats alike. The right-wing politician leading a widely unpopular Venezuelan political force declared himself the legitimate head of state in January 2019, after disputing the outcome of a presidential election. He led several attempts to violently overthrow the government, with about as much success as Angeli and other protesters had in preventing Joe Biden from being confirmed as the winner of the US presidential election. 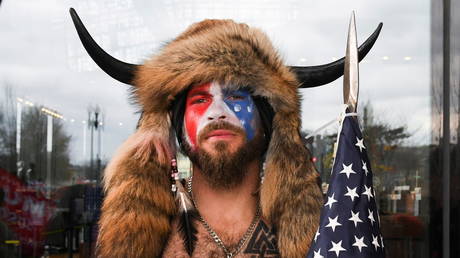