Nothing says you represent an internationally recognized government like telling people who mock you on Twitter that the FBI is after them and that there is a “price” on their heads. Just ask Juan Guaido’s ‘ambassador’ to the UK.

Last Friday, the personal account of Vanessa Neumann, the Venezuelan businesswoman who serves as the representative of self-proclaimed ‘interim president’ Juan Guaido in Britain, posted a call for the death of the democratically elected Venezuelan President Nicolas Maduro.

The now-deleted post in Spanish is obviously hardly befitting an envoy. The Guaido team says it was the result of a hacking attack, but it provided fresh fodder to those who are skeptical about the man and his bid to represent the people of Venezuela. Among such people were journalists John McEvoy, Camila Escalante and Pablo Navarrete, who called her out or didn’t quite buy the hacking excuse.

Neumann hit back at her critics on Sunday. Using the Twitter account belonging to her consultancy firm Asymmetrica, she claimed the journalists were in the crosshairs of the FBI and that there was a price on their heads.

We have highlighted to @FBIWFO @FBI that @camilateleSUR @pablonav1 and @jmcevoy_2 are part of the criminal conspiracy against @vanessaneumann, supporting @drodriven2. Thank you for the evidence. Welcome to the rule of law, guys. pic.twitter.com/ll9kNT6SJA

When you’re a part of an indicted transnational criminal network with a price on your head @venanalysis and @jmcevoy_2. Thanks for helping us nail you with the @FBIWFO @FBI https://t.co/SblYavte1w

This may seem like an overreaction by a thin-skinned member of a failed regime-change operation, but Neumann has an explanation for why the FBI should go after people who mock her online.

The journalists are members of a “transnational criminal network” – the Maduro “regime” – responsible for the hack, according to Neumann. And being part of this conspiracy makes them accountable for its crimes.

The US indicted Maduro and his allies on “narco-terrorism” charges in March and offered multi-million bounties for their capture.

The accusations by Neumann “are at once serious and laughable,” McEvoy told MintPress. “This is no way for anybody, let alone a ‘diplomat’, to behave,” he said, adding that the Foreign and Commonwealth Office should now “seriously reconsider its recognition of her” in the UK.

Guaido’s ‘ambassador’ may have other reasons to be unhappy with the people she threatened with US law enforcement. For instance, in May, McEvoy wrote an expose detailing how the British government has been propping up Guaido’s operation and planned to participate in the “reconstruction” of Venezuela, to the benefit of British firms, after he actually takes over.

The ‘interim president’ has the backing of Washington and some of its allies, but his many attempts to seize power in Venezuela have spectacularly failed to achieve the goal. But he has had some successes too, like the decision of the UK High Court last week to recognize his claim to $2 billion worth of Venezuelan gold stashed in the Bank of England for safekeeping. 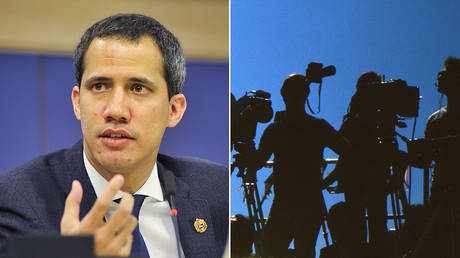