Close
Trending News
HomeWorldPrice of making US stay? Trump says he doesn’t want to leave NATO but allies’ 2% spend is ‘too little’

Price of making US stay? Trump says he doesn’t want to leave NATO but allies’ 2% spend is ‘too little’

Price of making US stay? Trump says he doesn’t want to leave NATO but allies’ 2% spend is ‘too little’

Perhaps to the relief to his transatlantic allies, Donald Trump has said he doesn’t want to lead the US out of NATO but he does want them to pay their “fair share” – a price that could be more than two percent of members’ GDP.

Trump dispelled speculation that he might consider quitting NATO while talking to the Washington Post’s Marc Thiessen. He boasted about piling pressure on bloc members, telling the journalist that he raised “$140 billion from NATO countries going up to $400 billion” throughout the course of three years.

Making an impression that the US might quit was actually a bargaining chip used to persuade allies into spending more on defense, the president revealed.

I had some that were paying almost nothing, and now they’re paying. And they asked me the big question: Would you leave if – and I said, ‘Yeah, I would leave.’ And if you don’t give that answer, they’re not going to pay.

Openly calling Russia the “purpose” of the military alliance, Trump once again reiterated: “No, I don’t want to leave. But I want them [NATO members] to pay their fair share.”

According to the US president, eight more NATO allies are now meeting their two-percent targets. But still, that is not enough. “And by the way, two percent is too little,” he complained.

Trump, who has repeatedly called NATO obsolete and old-fashioned, has consistently locked horns with other Western leaders on burden-sharing within the alliance. He insisted that the privilege of hosting US troops – and being under the American defense shield – comes at a price.

One of his favorite targets was Germany, Europe’s biggest economy, which he has repeatedly accused of benefiting from American troop presence while spending very little on the common NATO cause. Berlin has finally agreed to raise its military expenditure in the coming decade, but its ties with Washington have frayed considerably.

Trump himself pledged to withdraw roughly 10,000 troops from Germany, telling the Post that some personnel will re-deploy to neighboring Poland – one of the staunchest US allies in Europe – and “different places that deserve it,” while the rest will return home. 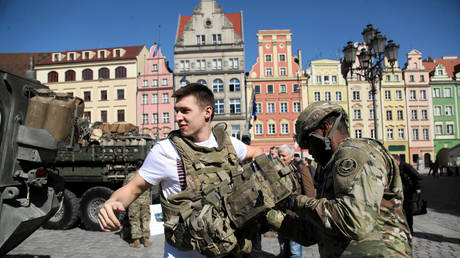