Despite failing to convince its UN Security Council colleagues to reimpose sanctions on Iran, the US is attempting to circumvent them, setting a date for the ‘snapback’ and daring other countries to call its bluff.

US Secretary of State Mike Pompeo unveiled a creative interpretation of UN Security Council Resolution 2231 on Thursday, presenting Tehran with a catch-22: either the sanctions the US wants to reimpose take effect on September 20, or a Security Council member attempts to introduce a resolution to continue sanctions relief – in which case the US will block it.

If any member of the @UN Security Council introduces a resolution to continue sanctions relief, the U.S. will oppose it. If no resolution is introduced, the sanctions on Iran will still return on September 20. That’s how UNSCR 2231 works. pic.twitter.com/KK7tyq0tJP

“That’s how UNSCR 2231 works,” the diplomat tweeted, with more than a hint of smugness.

UN Security Council President Dian Triansyah Djani has already dismissed US efforts to reimpose UN sanctions on Iran under the provisions of the 2015 JCPOA nuclear deal, noting a lack of consensus among the council’s 15 members – 13 of whom pointed out Washington is no longer a signatory to the deal and thus has no standing to enforce any part of it. However, UNSCR 2231 is not part of the actual JCPOA, though it endorses the treaty and compels Security Council members to respect it.

The five other signatories to the nuclear deal all stood firm against the initial US effort to impose snapback sanctions under the agreement, arguing the complaint was not valid since Washington had pulled out of the deal in 2018. While the US attempted to justify its withdrawal at the time on the grounds that Iran was secretly violating the deal, it was unable to produce any proof to back its claims, and the International Atomic Energy Agency tasked with assuring compliance had repeatedly certified Tehran was holding fast to the deal’s terms.

The Trump administration has scrambled to reimpose the sanctions after its attempt to extend a 13-year arms embargo against the country failed profoundly last week, attracting just one member of the Security Council to join the US in supporting it.

Iran has condemned the US efforts to turn multilateral agreements into unilateral punishment, referring to Pompeo’s behavior as “lawless bullying” that has left the US “isolated.” 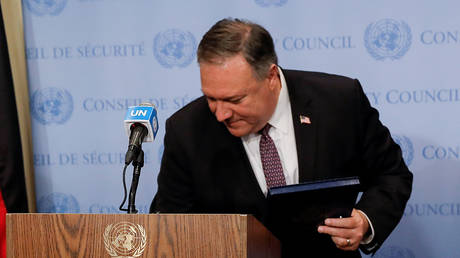