US State Secretary Mike Pompeo has faced ridicule online after he brushed off opposition from other UNSC members to snapback sanctions the US wants to hit Iran with, while saying the punitive measures would be “multilateral.”

“If at any time the United States believes Iran has failed to meet its commitments, no other state can block our ability to snap back those multilateral sanctions,” Pompeo declared in a statement, posted by his official Twitter account on Sunday evening.

The US top diplomat referred to the avalanche of sanctions Washington has been hellbent on slapping on Tehran after the United Nations Security Council (UNSC) overwhelmingly rejected the US resolution to extend a 13-year arms embargo against the Islamic Republic past October earlier this week.

The humiliating defeat, that saw only one member of the 15-nation body, the Dominic Republic, siding with the US, while China and Russia opposed the resolution, and all other nations, including France and the UK, abstained, did not discourage Washington, which doubled down on its threat to hit Iran with biting sanctions.

US Ambassador to the United Nations Kelly Craft said that the US would leave no stone unturned in its push to impose sanctions on Iran, saying that the US “has every right” to target it with the so-called “snapback” sanctions under the 2015 nuclear deal which can be enforced if a signatory deems Iran to be in violation of the agreement. Despite leaving the deal in 2018 and effectively bringing it on the brink of collapse with its unilateral withdrawal, the US reportedly circulated a memorandum among the UNSC members, claiming that it was still a member of the accord.

You cannot invoke an agreement from which you have unilaterally withdrawn.

Pompeo’s interpretation of “multilateral” coupled with his intent to disregard any objections other parties to the nuclear agreement (Russia, China, Britain, France, and Germany) may have, has baffled quite a few commentators online.

“Of course other states can block America’s ability to impose multilateral sanctions. The US can impose sanctions by itself, but can’t force others to do it,” Nicholas Grossman, Teaching Assistant Professor, Department of Political Science, University of Illinois, tweeted.

“That’s what “multilateral” means. Is our SecState really this dumb?” Grossman asked.

Of course other states can block America’s ability to impose multilateral sanctions.
The US can impose sanctions by itself, but can’t force others to do it. (And this admin can’t persuade them to do it either).
That’s what “multilateral” means.
Is our SecState really this dumb? https://t.co/8jtYcO15I6

Daniel Larison, Senior Editor at the American Conservative, suggested that Pompeo might be having a hard time with grasping the meaning of the word “multilateral.”

Still unclear on the meaning of multilateral, I see https://t.co/Lj6x3yBhui

Some argued that the top US diplomat could not be unaware of the contradictory nature of his statement, with Dan Murphy, former Middle East and South Asia correspondent for the Christian Science Monitor calling it “one of the most diplomatically illiterate sentences of all time.”

“I guess the end game here is [to] alienate the rest of the world even further to feed his persecution complex?” Murphy wrote.

Declaring a unilateral American right to force the European Union, China and Russia to do our bidding against their will is special, even for this goon. https://t.co/oa2kRdVFqN 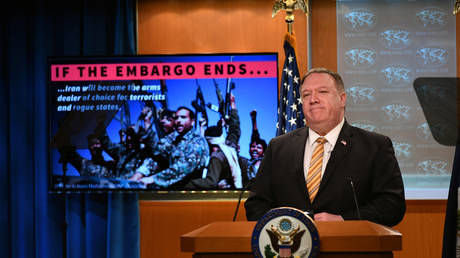 Pressure on Boris after u-turn for...