US Secretary of State Mike Pompeo took offense at the suggestion police abuse of protesters at home had anything in common with behavior he criticizes in “authoritarian regimes,” deeming the comparison “incomprehensible.”

Asked during an interview Wednesday with Radio Free Europe whether the heavy-handed US response to protests “on its own turf” had “harmed America’s image” abroad, the American diplomat lashed out at the reporter, denouncing the question as “insulting.”

“The difference between the US and these authoritarian regimes couldn’t be more clear,” Pompeo insisted, reminding his interviewer, “we have the rule of law, we have the freedom of press, and every one of [the protesters being arrested] gets due process.”

To somehow suggest that America’s moral authority is challenged by the amazing work that our police forces, our law enforcement do all across America, I frankly just find the question itself incomprehensible and insulting.

It’s hardly the first time Pompeo has been reminded of US inconsistency regarding its sanctimonious pronouncements about other countries’ crackdowns on “peaceful protesters” – or the press, for that matter.

A staunch defender of the right of some Hong Kong residents to express their discontent with Chinese rule by destroying their city, Pompeo was confronted with the disconnect between Washington’s indulgence of those “protesters” and its brutality toward some Black Lives Matter protesters back in June. Then, too, he brushed off the notion of a “moral equivalency between what takes place in these countries where they repress their people” and the US.

Despite Pompeo’s praise of their “amazing” work, US cops have killed more people in the few months following George Floyd’s death at police hands than Chinese cops have in the entirety of the Hong Kong protests. And while the US diplomat spent the past few months praising America’s press freedoms, the Trump administration was kicking dozens of Chinese journalists out of the US and severely curtailing the operations of Chinese media organizations.

Even the secretary of state’s invocation of religious freedom as that which sets the US apart rings a bit hollow given that American places of worship have been prohibited for months from holding services due to the Covid-19 pandemic, while Wal-Marts and military contractors have been able to operate uninterrupted.

Pompeo launched what US media called his “anti-China, anti-Russia tour” in the Czech Republic earlier this week. He promised to deliver “freedom” to Belarus, where a landslide election in favor of incumbent President Alexander Lukashenko has brought hundreds of thousands of protesters onto the streets declaring the vote to have been rigged. 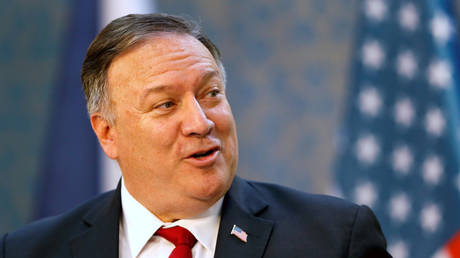