Polish President Andrzej Duda has become the latest victim of the famous Russian prankster duo ‘Vovan and Lexus’. The leader sensed something was off when the pair, posing as the UN chief, raved about traditional Polish liquor.

Supposedly calling the freshly re-elected Duda to congratulate him on his “impressive victory” in the country’s recent election, one of the pranksters posed as none other than UN Secretary-General Antonio Guterres.

Duda, who only narrowly managed to snatch victory in a very tight race, was apparently so glad to hear from the high-ranking UN official that he apparently did not immediately realise that something might not be quite right.

Even some bizarre ideas voiced by the fake secretary-general – like a suggestion that Warsaw grab a part of neighboring Ukraine’s territory, including the city of Lviv which historically belonged to Poland – did not did not seem to put Duda on full alert. He did pause in silence for a few seconds, however, before assuring ‘Guterres’ that no political force in Poland has ever considered such an option.

The idea that something may be amiss did cross Duda’s mind, however, when the fake UN head mentioned ‘Zubrowka’ – a traditional and strong Polish liquor – which he supposedly received as a gift from another Pole, former European Council President Donald Tusk.

“During the conversation, I realized something was probably wrong. The secretary-general does not pronounce the word ‘Zubrowka’ so well, although the voice was very similar,” Duda wrote in a Twitter post, thus confirming the authenticity of the recording published by the pranksters on their YouTube channel.

The presidential palace also confirmed that the conversation happened – but it was not Duda who eventually landed in hot water over the embarrassing call.

It turned out the pranksters had called the president through his office’s international department, according to Polish media reports. Such matters are supposed to be supervised by the office’s head, Krzysztof Szczerski, but the duo managed to slip through unimpeded.

Szczerski even initially sought to conceal the whole ordeal, admitting his mistake only after the recording was published. The Polish special services are now investigating the prank call.

Duda is certainly not the only person to have been tricked by the famous duo. Vovan and Lexus are the stage names of Vladimir Kuznetsov and Alexey Stolyarov, who have been collaborating since 2014. Over the years they have played pranks on many public figures, including singer Elton John and French President Emmanuel Macron. US Representative Maxine Waters even fell for their hoaxes more than once.

One of the pair’s latest victims was Senator Bernie Sanders, when the duo posed as teen climate activist Greta Thunberg and her father – even convincing the lawmaker to take part in a rap collaboration with singers Billie Eilish and Kanye West. 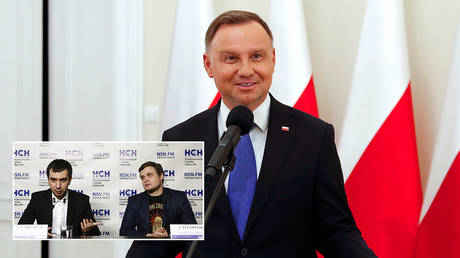