Poland’s deputy prime minister, and most powerful politician, Jaroslaw Kaczynski, has warned that he will block the EU’s post-Covid economic recovery program if the bloc continues to interfere with internal issues in the country.

Kaczynski, leader of the ruling Law and Justice (PiS) party, said in an interview that he would reject the EU plan unless Brussels dropped language in the legislation that made adherence to so-called ‘democratic’ values a precondition for receiving recovery payments.

There will be a veto. If the threats and blackmail are maintained then we will firmly defend Poland’s vital interest. We are dealing with an attempt to take our sovereignty, even in the sphere of culture. We will defend our identity … We will not allow ourselves to be terrorized with money.

EU leaders have approved a seven-year budget and stimulus plan aimed at helping member states bounce back from the economic devastation caused by lockdowns imposed during the coronavirus pandemic. However, both the budget and recovery package still need to be approved by EU lawmakers and the bloc’s national parliaments.

Brussels has taken aim at Warsaw for its conservative stance on a range of issues, including immigration and the bloc’s environmental policies. Along with Hungary, Poland is under EU investigation for allegedly placing political pressure on courts, media outlets and Non-Governmental Organizations (NGOs). Both countries were censured by the European Parliament in April for flouting “European values” during the Covid-19 pandemic.

Last month, Hungary and Poland announced the creation of an institute that would monitor violations of law within the EU. Hungary’s foreign minister, Peter Szijjarto, said that the new institute will closely follow how the rule of law is upheld across the bloc, in order to ensure “double standards” aren’t being used to unfairly accuse Budapest and Warsaw of wrongdoing.

Both countries have previously threatened to veto the coronavirus aid package if Brussels refuses to drop language from the bill concerning respect for the “rule of law,” which they say is unfairly aimed at them. 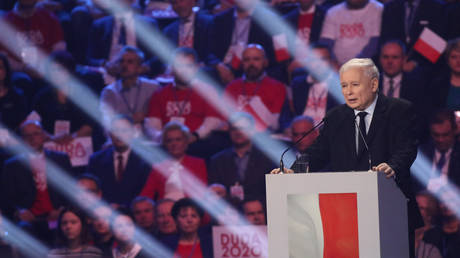 Threat from EXPLOSIVE space junk i...