The government of Poland has requested that the president officially impose a state of emergency for parts of the country bordering Belarus, amid a rise in migrants seeking to cross illegally from there into the EU member state.

Poland has stationed border guards and soldiers along its border with Belarus to stem the flow of migrants seeking to cross over and request asylum within the EU. If granted, a state of emergency would provide authorities with greater powers to monitor and control people’s movements.

While not yet confirmed by President Andrzej Duda, as he is an ally of the ruling Law and Justice Party it is likely he will approve the government request. If imposed, the measure would be in place for 30 days in the Podlaskie and Lubelskie regions.

“The situation on the border with Belarus is a crisis and is still tense,” PM Mateusz Morawiecki said at a press conference on Tuesday, as he laid out the government’s request.

That request comes after the Polish military finished construction of the first six kilometers of a barbed wire fence along its Belarus border that will eventually stretch for nearly 150 kilometers (93 miles) and stand 2.5 meters tall.

In recent months, Polish authorities have claimed that thousands of illegal immigrants have attempted to cross from Belarus into Latvia, Lithuania or Poland. In the month of August alone, Polish border guards stated they stopped 3,095 attempted illegal crossings in what the EU has claimed was a “direct attack” on the bloc orchestrated by neighboring state and non-EU-member Belarus. Morawiecki reiterated this view at his press conference Tuesday, alleging that “Lukashenko’s regime decided to push these people onto Polish, Lithuanian and Latvian territory in an effort to destabilize [these countries].”

Belarus has rejected the allegations that it is encouraging migrant crossings as a form of political action, with leader Alexander Lukashenko simply refusing to continue efforts to halt the flow of immigrants westward, after the EU imposed sanctions on his government over the 2020 presidential election. 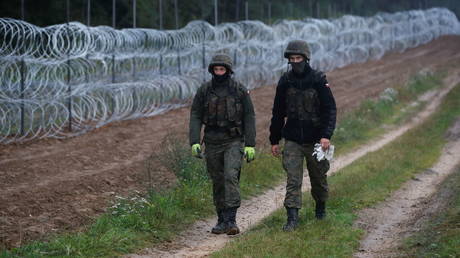