A demonstration over an incident in which a young black man died shortly after his detention by police in the Belgian capital, Brussels has ended in clashes with law enforcement as angry protesters torched a police station.

What started as a peaceful protest abruptly spiraled into a violent standoff between demonstrators and police on Tuesday. Several hundred protesters, including relatives and friends of a deceased young man identified as Ibrahima Barrie, went to a square in front of the Brussels-North police department to demand answers about the death of the 23-year-old.

Things turned violent, however, when a group of young people began targeting police with firecrackers and stones, while shouting: “police, murderers!” According to some reports, the group sought to split off from the main crowd and stage a march. However, the protesters were only allowed to rally at the square, and police cordoned off the nearby streets and did not let the group pass.

Small scale rioting in Brussels tonight, follows an early demonstration, with protesters angry about the death of a 23 year old black man on Saturday who was in police custodypic.twitter.com/WSKISAF42B

Local media also reported that demonstrators took construction materials from a construction site, which they used to throw at officers. A police car was damaged and several waste containers were set on fire during the clashes. Police responded by using a water cannon against the protesters.

The organizers, the Association of Young Guineans of Belgium, sought to calm things down, but to no avail. Videos published on social media show police blocking the streets with minivans, with what appears to be burning barricades and exploding firecrackers in the background.

Belgian King Philippe’s car was driving through the square just as protesters were clashing with police. According to Belgian media, it was not attacked or damaged.

Despite riot police being deployed to the scene, law enforcement struggled to contain the rioters. Closer to evening, the crowd managed to set a local police station on fire.

WATCH: Quite shocking video emerging from Brussels tonight, where riots have broken out following earlier protests following the death of a 23-year-old black man in police custody on Saturday: pic.twitter.com/6TALjCVboB

According to Belgian media, “several arrests” were made during the clashes, but there is no information on the exact number of those detained, or on those injured during the standoff.

Ibrahima Barrie was detained last Saturday. There are conflicting reports about the circumstances of his arrest. The Brussels Prosecutor’s Office told local media that the young man sought to avoid a police check. “The police are in the habit of temporarily arresting people who want to evade a check to find out why they are doing so,” it said.

His family says he was arrested because he filmed another police check on his phone. Upon arrival at the police station, he suddenly felt unwell and passed out. Officers tried to resuscitate him and eventually called an ambulance. He was pronounced dead at the hospital.

The family’s lawyers say police were negligent and left Barrie unconscious for at least five minutes before taking any action. The Brussels Prosecutor’s Office has opened an investigation and ordered an autopsy and toxicological examination to determine the exact cause of Barrie’s death. 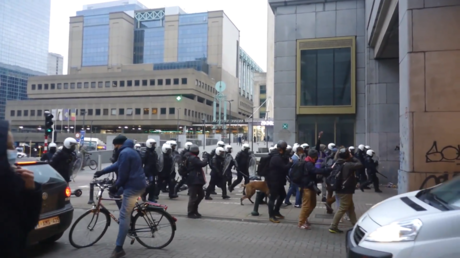 WHO fact-finding mission arrives i...