Polish President Andrzej Duda has imposed a state of emergency in two regions bordering Belarus for the first time in the nation’s post-Communist history. The move was prompted by a sharp increase in migrant arrivals.

“The president decided to… introduce a state of emergency in the areas designated by the Council of Ministers,” Duda’s spokesman, Blazej Spychalski, told a press conference on Thursday. The state of emergency would stay in force for at least 30 days.

“The situation on the border with Belarus is difficult and dangerous,” Spychalski said. “Today, we as Poland, being responsible for our own borders, but also for the borders of the European Union, must take measures to ensure the security of Poland and the European Union.”

On Tuesday, the government formally asked Duda to impose the state of emergency in some areas of Poland’s eastern Podlaskie and Lubelskie regions that border Belarus. The order would apply to a total of 183 municipalities directly adjacent to the border and would form a three-kilometer-deep zone along the border with Belarus, the Polish media reported.

It is otherwise not exactly clear what measures the state of emergency would entail. Poland has never introduced such measures in its post-Communist history, and avoided imposing one even during the most difficult periods of the Covid-19 pandemic, despite some calls on the government to do so.

The measure is yet to be approved by the lower house of the Polish parliament – the Sejm. It is scheduled to convene on the matter on Friday or Monday, according to Polish media reports.

The MPs can potentially repeal the decision. Poland’s Law and Justice party, which supports the government and holds most seats in parliament, would need just 11 additional votes to block any such attempts, but most opposition parties have not yet taken a public stance on the issue. The Left Party was the only one so far to say it would oppose the move and seek to repeal it.

The move comes amid a surge in illegal migration that Poland and some Baltic states have been facing over recent months. Thousands of migrants believed to be traveling from the Middle East have crossed or attempted to cross into Latvia, Lithuania and Poland from neighboring Belarus over that period.

The Polish border guards said on Wednesday that August alone saw a total of 3,500 attempts by migrants to enter Poland from Belarus. The guards thwarted 2,500 of such attempts.

The EU previously accused Belarus of engaging in a “direct attack” on the bloc and trying to “instrumentalize human beings for political purposes” by pushing migrants toward the borders of member states. Vilnius also accused Minsk of flying in migrants from abroad and shuttling them to the border as a form of warfare.

Belarusian President Alexander Lukashenko refuted the accusations and said instead that his administration would no longer try to stop migrants from crossing into the EU after its members imposed sanctions against Belarus over the disputed 2020 presidential election.

The developments already prompted Warsaw to send troops to build a 2.5 meters tall razor-wire barrier designed to stretch for most of the 150-kilometer (93-mile) border with Belarus.

Poland and Latvia, meanwhile, faced a reprimand from the European Court of Human Rights (ECHR), which demanded the two nations assist migrants who cross over their borders with Belarus. The court took such a decision in late August following appeals from 32 Afghan and 41 Iraqi nationals stuck at the frontiers. 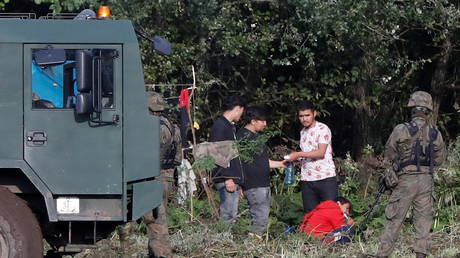 Victoria to ban displaying of Nazi...