Poland’s President Andrzej Duda appears to have just about managed to snatch victory from his opponent, Warsaw Mayor Rafal Trzaskowski, in an incredibly tight race, with exit polls showing he’s just one percent ahead.

Duda has gained just over 50 percent of the vote, while his opponent secured 49.6 percent, according to the first exit poll results published by the Polish media.

In the first round, his advantage over Trzaskowski was much more noticeable and accounted for more than 10 percent. He still fell short of the overall majority that would have allowed him to win outright as he gained only 43.7 percent of the vote.

Yet, Duda already thanked his supporters and all voters for the “amazing turnout,” which he said is a “beautiful testimony to our democracy.” The president said that he would like to continue the policy he pursued during his previous term. He also congratulated Trzaskowski on his result.

The Warsaw mayor appeared in no mood to give up just yet, though. “It is close but I am absolutely convinced that we will win. All you have to do is count the votes,” he told his supporters, adding that “this night will be nervous for everyone.”

The presidential vote has certainly managed to grab the nation’s attention, with people heading to the polling stations in record numbers not seen since 1995. The voter turnout in the runoff was more than four percent higher than in the first round two weeks ago, and amounted to more than 68 percent.

Duda has built his campaign around generous social-benefit programs that have primarily benefited less well-off rural regions, and promises of large infrastructure projects he said would create jobs and boost the nation’s economy.

Yet, a conservative and an ally of the ruling Law and Justice (PiS) party, he also portrayed himself as a defender of tradition and Catholic values, drawing accusations of homophobia and anti-Semitism. In one of his speeches, he said that what he called an LGBT “ideology” is more sinister than “Bolshevism,” drawing comparisons with the nation’s communist past, which has been a hot political topic in recent decades.

His speech even sparked a brief spat with the Western media, after he accused news outlets of taking his words out of context in their coverage.

His opponent, Rafal Trzaskowski, widely seen as a liberal candidate, is known for his pro-LGBT position. Yet he also sought to capitalize on Warsaw’s ongoing row with Brussels over what the EU sees as infringement on the rule of law, promising to block any bills he believed would undermine democratic norms.

Trzaskowski has declared that he would seek to lead a more “tolerant” Poland. He vowed to close the state news channel TVP Info, while keeping in place the benefit programs championed by PiS. 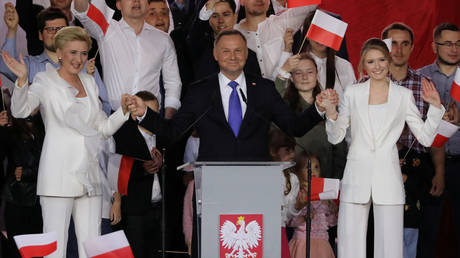