The head of the EC has said that Poland and Hungary should take their objections against making access to EU funding conditional on the rule of law to court, and stop blocking the EU budget and its vital Covid support package.

European Commission President Ursula von der Leyen urged Poland and Hungary to refrain from blocking the new EU budget proposals on Wednesday, advising that the two nations take their protest to the European Court of Justice.

Speaking to the European Parliament, von der Leyen stressed that the proposed budget included financial relief for nations suffering economically as a result of Covid-19, and said it was vitally important that the financial support package is available to them as soon as possible.

Poland and Hungary blocked the proposed budget last week as both nations, along with Slovenia, object to new conditions in the proposal which would restrict EU funds for member states that fail to maintain the rule of law in their own countries.

“We are talking here about the violations of the rule of law that are threatening the EU budget and only that. It is very difficult to imagine anybody in Europe who would possibly have anything against that principle,” von der Leyen told European lawmakers.

The commission president said that Hungary and Poland should take their objection to the European Court of Justice, where the new rules can be tested.

“That is the place where differences of opinion about legislative texts are usually settled, and it is not done at the expense of millions and millions of European citizens who are urgently waiting for our help,” she said.

Von der Leyen’s suggestion is one of the ways being discussed for the member states to overcome the budget impasse.
The veto by Hungary and Poland last Monday has thrown the contents of the next EU budget into doubt.

The current proposed budget includes a total package of €1.8 trillion of funding – the largest ever financed through the EU – which looks to play a leading role in Europe’s post-Covid recovery. 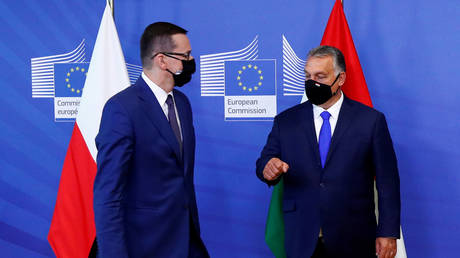