The Philippines foreign ministry has accused China’s coastguard of illegally seizing fishing equipment near a disputed shoal in the South China Sea. The move has sparked a fresh row with Beijing.

Manila lodged a diplomatic protest on Friday over the “illegal confiscation” in May of floating devices used to catch fish. The ministry also “resolutely objected” to China issuing radio challenges to Philippines aircraft conducting maritime patrols in areas of the sea claimed by Manila, AFP reported.

Beijing said the coastguard’s actions “are understandable” as they carried out law enforcement activities. China’s foreign ministry also accused the Philippines military aircraft of invading Chinese airspace in another disputed section of the sea and called on Manila to “immediately stop illegal provocative activities.”

Scarborough Shoal, located some 240km (150 miles) west of the Philippines’ main island of Luzon, is one of the region’s richest fishing grounds and is claimed by both Beijing and Manila.

While Philippines’ relations with China have improved under President Rodrigo Duterte, Manila decided to delay quitting a key military pact with the US earlier this year over regional security concerns. 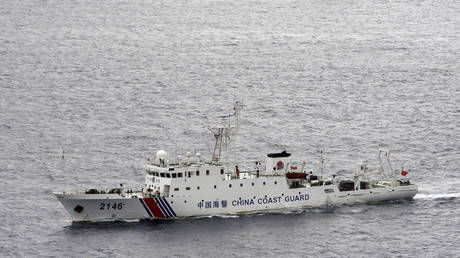