Philippine President Rodrigo Duterte has been accused of objectifying women during a meeting about a destructive typhoon ripping through the country. A government spokesman said Duterte was just trying to lighten the mood.

Duterte ended a situation briefing about Typhoon Ulysses, which has killed at least 67 and caused extensive damage with some eyebrow-raising remarks.

Speaking in the province of Camarines Sur, he said that one local official at the meeting, a former classmate from law school, had grown “old” from constant womanizing.

The official retorted that he had been told that he was actually “undersexed.”

“That’s why you should make me a Cabinet secretary so I’ll no longer be undersexed,” he responded. Officials sitting around the table then burst into laughter.

According to local media reports, Duterte also joked that someone who had recently died from coronavirus passed away because he had been “deprived of women.”

The exchange was denounced by journalists and political opponents, who said Duterte’s comments were indefensible.

One Filipina journalist railed against the “contemptible” jokes and accused the president of “citing women as if they were objects.”

https://t.co/Z7UGF1uPrL – WATCH it so you know exactly how contemptible this “joke” is.
Why this is wrong on so many accounts:
• Citing women as if they are objects to be used is just so…
• Duterte is head of state, therefore, parens patriae, di ba?
1/n https://t.co/h3p2EuwWfy pic.twitter.com/WHSvUDYQcE

Similarly, an official for Gabriela Women’s Party, an organization representing Filipina women in the House of Representatives, castigated Duterte for “still having the audacity to blabber inappropriate jokes when people literally drowned and died due to a series of calamities.”

Duterte’s own vice president, Leni Robredo, cautioned government officials to be careful with their messaging during times of crisis, while claiming that she hasn’t personally watched the salacious briefing in question.

Pushing back against the criticism, presidential spokesman Harry Roque insisted that Duterte was simply trying to lighten the mood amid the deadly natural disaster.

“He was looking for a little break after the consecutive tragedies he saw from the calamities of places he visited,” Roque argued, adding that it’s common for Filipinos to “try to lighten our problems” when faced with “so much hardship.”

The Philippines’ president is known for his outspoken views, especially on sensitive subjects. He once called God “stupid,” and has expressed similar disrespect for non-deities. He famously referred to former US President Barack Obama as a “son of a b*tch/whore,” telling him to “go to hell.” He also threatened to “burn down the United Nations” and called former UN Secretary-General Ban Ki-moon a “devil.”

More recently, he threatened to shoot anyone who didn’t comply with his country’s Covid-19 lockdown. 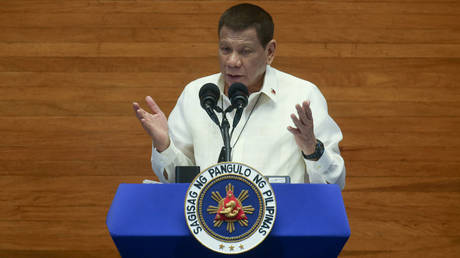 ‘Too early’ to say if lockdown can...