Pfizer-BioNTech says its Covid vaccine is safe and effective for children aged 5-11, will seek authorization soon

Pfizer-BioNTech says its Covid vaccine is safe and effective for children aged 5-11, will seek authorization soon

Pfizer-BioNTech has announced that its Covid-19 vaccine is safe and effective for children from 5 to 11 years old based on its clinical trial data, and that the companies will soon seek authorization from regulatory bodies.

On Monday, Pfizer/BioNTech shared results from its clinical trials, stating that their Covid vaccine “was safe, well-tolerated and showed robust neutralizing antibody responses” in kids as young as five.

Children taking part in the study were given a dose a third of the size received by children aged 12 and over. Despite administering a smaller amount, the results were “consistent with those we have observed with our vaccine in other older populations at a higher dose,” Dr. Ugur Sahin, CEO and co-founder of BioNTech, remarked.

Pfizer’s Chairman and CEO Albert Bourla said the pharmaceutical companies “are eager to extend the protection afforded by the vaccine to this younger population, subject to regulatory authorization, especially as we track the spread of the Delta variant and the substantial threat it poses to children.”

The pharmaceutical companies announced that they plan to submit their findings to the US Food and Drug Administration (FDA), the European Medicines Agency (EMA), as well as other regulators, “as soon as possible” to gain authorization.

The two big pharma companies also noted that data from two other age cohorts, including trial information from infants aged 6 months to 2 years old, as well as kids up to the age of five, will be shared by the fourth quarter of this year.

The FDA fully approved Pfizer-BioNTech’s vaccine, marketed as Comirnaty, in August for individuals aged 16 and over. The mRNA technology shot is authorized for emergency use in children between the ages of 12 to 15, as well as for a booster shot for the immunocompromised.

Both the US Centers for Disease Control and Prevention (CDC) and the EMA, however, have reported incidences of rare heart inflammation, myocarditis and pericarditis, following the administration of mRNA shots, including Comirnaty. Since April, over a thousand cases have been flagged to the CDC, mainly in young males aged 16 and over. 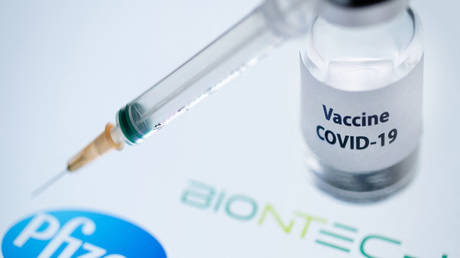 Resistance to vaccines, lack of co...

Hacker is blocked after tweeti...