Peruvians in Amazon get VETERINARY DRUG against ‘devilish’ Covid-19. Side effects of controversial remedy inflame debate

Peruvians in Amazon get VETERINARY DRUG against ‘devilish’ Covid-19. Side effects of controversial remedy inflame debate

Some 5,000 people in Peru’s Amazon region have suffered heavy side effects after receiving a veterinary dose of a controversial anti-parasite drug, bizarrely touted as a “coronavirus vaccine” by local evangelist groups.

As its Covid-19 epidemic snowballed into a nationwide disaster, Peru – now the second hardest-hit place on the South American continent – moved to greenlight the use of ivermectin, a low-cost anti-parasite medication introduced back in the 1980s, for treating early stages of the virus.

The drug is approved for use both in animals and humans, but the devil is in the detail – their respective dosages and formulae are said to be poles apart. While endorsing the human ivermectin, Peru’s health officials warned against the misuse of its veterinary version, which is much more toxic and less efficient against viral contagions.

That warning, however, failed to reach the ears of people in the isolated region of Loreto, the largest in the Peruvian Amazon. A local mayor and an evangelical group touted injection of the veterinary ivermectin as a palliative for Covid-19 – and many agreed to take it, arguably through fear of catching the virus.

Some evangelical priests were telling their parishes the animal drug was “salvation” from the novel coronavirus – in their own words, a creature of the devil and a sign of the end of the world. Making things worse, volunteers injecting ivermectin did not know which form of the drug they were administering; still, they were telling people that the off-label use was approved by law.

Adding the anti-parasitic drug to Covid-19 treatment protocols didn’t come out of the blue. With over 257,000 active Covid-19 cases and close to 8,300 casualties, Peru has been hastily looking for any cure that could help contain the virus, including the repurposing of existing drugs.

The nation made such a decision shortly after a preprint study – based on a database provided by the controversial healthcare analytics firm Surgisphere – suggested the use of ivermectin inhibits replication of Covid-19 and shows promising results. Critics, however, argued the data was far from accurate and lacked consistency, while the US Food and Drug Administration (FDA) explicitly prohibits the drug’s application for treating coronavirus.

The US-based firm, whose employees reportedly include an ‘adult’ entertainer and a sci-fi writer, previously sparked controversy after claiming the anti-malaria drug hydroxychloroquine increases Covid-19 mortality. Before Surgisphere came under intense scrutiny, their research was used as grounds to halt testing of the drug in Covid-19 patients, including by the World Health Organization. 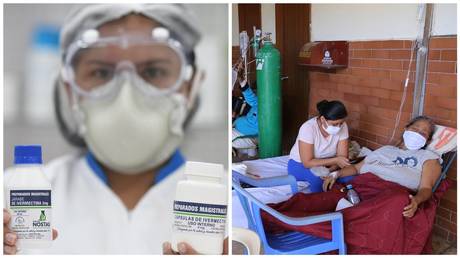 Icy Pluto may have had a ‘hot star...