Pentagon says Trump greenlit ‘redeployment’ of 9,500 US troops from Germany as Congress seeks to challenge plan

Pentagon says Trump greenlit ‘redeployment’ of 9,500 US troops from Germany as Congress seeks to challenge plan

US President Donald Trump’s plan to draw down the US contingent in Germany has been set in motion, with the Pentagon saying that 9,500 troops out of 34,500 stationed there will be removed pending consultations with allies.

“The Secretary of Defense and Chairman of the Joint Chiefs of Staff briefed the President yesterday on plans to redeploy 9,500 troops from Germany,” Pentagon spokesman Jonathan Hoffman said in a statement on Tuesday, noting that the proposal had already been approved.

The plan to scale back the US military presence in Germany was made public by Trump earlier this month. He did not reveal the timeline for the withdrawal, and it was not immediately clear where they would be heading. The US contingent in Germany is expected to be slashed by 9,500 troops, meaning that Washington will still have a sizable 25,000-strong presence there.

Trump said that the pullout was in response to Berlin falling short of meeting a 2 percent GDP threshold in NATO defense spending, which was agreed back under the Obama administration. Although only eight countries so far have met the target, Trump directed his anger at Berlin, calling it “delinquent” in its payments to NATO and arguing that the country owes “billions” to the US-led military alliance.

While Trump’s critics used the looming withdrawal to pounce on the Republican president, accusing him of pandering to Russia, Trump has pointed out that while “some” of the released forces “will be coming home,” the rest will be redeployed to “other places.”

Although Hoffman did not mention where the troops would be “redeployed,” saying only that the plan “will also enhance Russian deterrence, strengthen NATO” and “reassure Allies,” the most likely destination is believed to be Poland, which has already expressed interest in hosting the US troops.

During a recent visit to Washington, Polish President Andrzej Duda said that Warsaw asked the US to not remove the troops from Europe at all, instead relocating them to Poland to fend off “Russian aggression.” Trump agreed that Poland indeed “would be one” of the places in Europe where the US troops would be heading, but that some would “come home.”

There have been few details about the timeline and the scenario of the removal, with the Pentagon promising to provide “timely updates to potentially affected personnel, their families and communities as planning progresses.”

With uncertainty reigning over the future of the German contingent, there has been growing opposition to the plan in Congress, not just from the Democrats but from Trump’s own party. Rep. Mac Thornberry (R-Texas), ranking member on the House Armed Services Committee,  said Tuesday that he expects an amendment to be introduced in the committee to stall the drawdown.

In a separate move, a bipartisan group of lawmakers led by Senator Mitt Romney (R-Utah) prepared an amendment that, if passed, would see the funds earmarked for the redeployment to be frozen until the secretary of defense “verifies” to Congress that the pullout would not hurt NATO, US military operations or the personnel.

Hoffman said that the Pentagon will be “briefing this plan to the congressional defense committees in the coming weeks,” before reaching out to NATO allies. 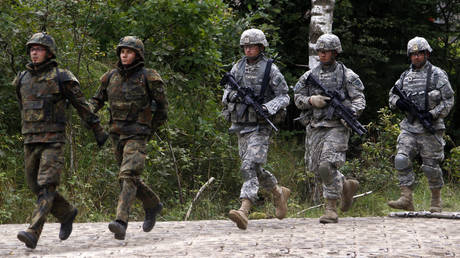