﻿Italy did not ask the EU to pay Libyan authorities to prevent migrants from heading to Europe from its shores, the office of Prime Minister Mario Draghi has said, denying earlier reports in local media.

“At the moment, there is no initiative regarding creating a similar deal to what was done with Turkey,” an official in the prime minister’s office said when questioned on the issue by Reuters.

Rome believes that the EU must pay more attention to what’s happening in the southern Mediterranean, the official added, and be ready to offer financial support to all African nations that are used by refugees for transit.

Brussels and Ankara signed a deal in 2016 after more than a million people, mainly those fleeing fighting from Syria and Iraq, arrived in Europe in the previous year. According to the agreement, the EU offered Turkey €6 billion ($7.1 billion) in aid, visa-free travel and fast-tracked EU membership talks in exchange for Ankara stopping thousands of refugees from reaching the Greek islands.

The deal was largely panned by human rights groups. “Outsourcing the EU’s migration management to non-EU countries is neither a humane, sustainable or workable solution,” said Imogen Sudbury of the International Rescue Committee (IRC).

The agreement between the EU and Turkey has run its five-year term, but the bloc’s foreign policy chief, Josep Borrell, said in March that “it should continue to be implemented and continue to be the key framework for cooperation on migration.”

On Tuesday, Italy’s La Repubblica paper claimed that PM Draghi was planning to propose that the EU sign a similar deal with Libya, during a summit of the bloc’s leaders on May 24 and 25.

The report came amid a fresh spike in migrant arrivals from Libya to Italy. In recent days, some 2,000 people have landed on the island of Lampedusa after making the dangerous sea journey on small boats operated by human-traffickers.

According to Italian Interior Ministry data, around 13,000 migrants have disembarked on the country’s coasts since the start of 2021 – three times more than in the same period last year. 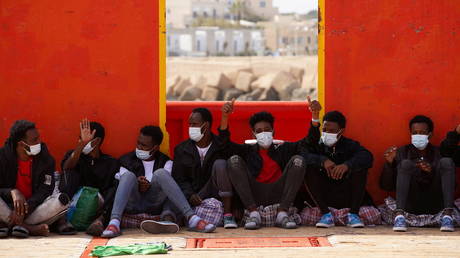