Scientists have detected a white dwarf star blazing across the Milky Way galaxy at 900,000kph, having been fired from a potentially new kind of supernova which acted like a nuclear slingshot.

According to a new study from the University of Warwick, the white dwarf star, known by the catchy name SDSS J1240+6710, was launched away from its binary partner star in a “partial supernova.”

This sent both suns speeding across the galaxy in opposite directions, thanks to one of the most powerful kinds of explosions humanity is aware of, which can, and often do, outshine entire galaxies for a time.

White dwarfs are the burnt-out cores left over after red giant stars die, and typically boast a very particular chemical composition. However, SDSS J1240 had a particularly unorthodox atmosphere which left researchers scratching their heads to explain. It also has a somewhat low mass for a white dwarf – only 40 percent that of our sun (White dwarf stars usually have between 0.15 and 1.2 solar masses).

This star boasts an odd mix of oxygen, neon, magnesium, and silicon as opposed to the standard blend of predominantly hydrogen or helium with small amounts of oxygen typically seen in white dwarf stars.

Scientists took a closer look with the Hubble Space Telescope and also identified carbon, sodium, and aluminum in the atmosphere, evidence of the thermonuclear explosions which take place in supernovae, which would explain some, but not all of the star’s violent past.

Suspiciously though, the “iron group” of elements (iron, nickel, chromium, and manganese) which would normally also be left behind after the thermonuclear storm of a supernova were missing, indicating that the white dwarf only experienced a partial supernova before jetting off elsewhere in the Milky Way.

This points to the possibility that there are many more such “supernova survivors” out there and that there may also be even more types of supernova that we have yet to observe.

“This star is unique because it has all the key features of a white dwarf but it has this very high velocity and unusual abundances that make no sense when combined with its low mass,” lead author Professor Boris Gaensicke from the Department of Physics at the University of Warwick said.

Researchers have yet to track down SDSS J1240’s binary partner but the hunt for more supernova survivors continues. 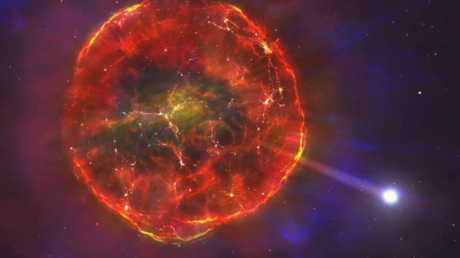