Catalonia’s regional parliament speaker Roger Torrent said the Spanish government would be complicit in spying on its political adversaries if it was aware of the ongoing tapping of his phone – and negligent if it wasn’t.

In a press briefing shortly after making an official statement in parliament Tuesday, Torrent vowed to take all political and legal action at his disposal to verify allegations, made by a Canadian cybersecurity firm during a joint investigation by the Guardian and El Pais newspapers, that he and two other separatist politicians were targeted by spyware called “Pegasus.”

“It is the first time we have verified what we already knew: within the Spanish state, spying is carried out against political opponents,” Torrent said Tuesday, as cited by El Pais.

“There had been complaints made by Amnesty International and other entities that states had been using [Pegasus] to persecute political dissidents, including in Morocco, Saudi Arabia and Mexico. And now we know it happens in Spain as well.”

The spyware in question is the product of an Israeli company, NSO Group, whose clients include law enforcement and governments across the globe.

NSO Group declined to confirm whether it sold products or services to the Spanish government, stating instead that its software “is operated in line with our industry-leading governance policies solely by authorised government agencies to fight terror and serious crime, and protect public safety.”

“It is clear that Mr. Torrent was not involved in criminal activity such as terrorism or drug trafficking that would justify a judicial order to intervene on his phone,” a spokesperson for the politician said on Monday evening.

A spokesperson for the Spanish prime minister’s office said the government was “not aware” of any spying.

“Any intervention on a mobile is always carried out in accordance with the law that requires judicial authorisation,” they added.

WhatsApp confirmed that roughly 1,400 users had been targeted by Pegasus, which exploited a flaw in the video calling system to deploy malware which could be used to take control of a target device’s multimedia functions, including its microphone and camera. 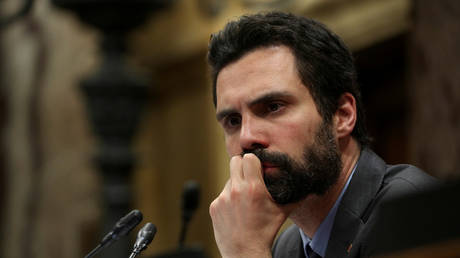