France is to increase policing in Paris and other big cities amid a “lack of respect” for Covid restrictions, the prime minister has said, warning that lockdown could be tightened if the situation worsens in the coming days.

Speaking at a press conference on Thursday, PM Jean Castex confirmed that France’s current measures to curb the spread of Covid-19 would remain unchanged for the next fortnight, explaining it would be “irresponsible” to lift them now amid serious pressure on the health system.

Currently, someone is admitted to hospital in France every 30 seconds and to intensive care every three minutes, Castex said, adding that one out of every four deaths is currently attributed to the virus.

The country of 66 million is Europe’s Covid-19 hotspot, and has the world’s fourth highest number of Covid-19 infections, with 1,900,000 confirmed cases, according to data from Johns Hopkins University.

“The challenge for the coming days is not to relax our efforts but to amplify them,” Castex said, adding that the “vast majority” of French people respected coronavirus restrictions, but not everyone.

“I asked the Minister of the Interior to further increase the mobilization of the police, particularly in Paris and in the big cities,” he added.

The PM said that the country could start to loosen some of the restrictions from December 1, if the number of new infections permitted. Non-essential shops would be allowed to re-open in such a scenario, although gyms, bars and restaurants would remain closed.

Castex added that the French government still did not plan to lift travel restrictions in early December, despite the reproduction value of the virus having fallen to between 0.8 and 0.9.

On Thursday, France’s Ministry of Health reported 33,172 new Covid-19 cases in the last 24 hours and said that another 425 people had died from the virus, taking the total death toll to 42,960. 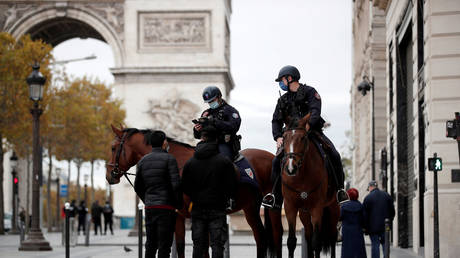