A Pakistani man accused of stabbing two people in Paris last week wanted to torch Charlie Hebdo’s office for republishing cartoons of the Prophet Mohammed, but wasn’t aware that the magazine had changed address, a prosecutor said.

The suspected attacker had three bottles of white spirit and a flammable paint thinner on him at the time, Paris prosecutor.

His initial plan was to enter into the office of the magazine, possibly with the help of a hammer, and then to set it on fire with the bottles of white spirit.

A three-minute video in Urdu was also discovered in the man’s phone – and allegedly included an explanation of his motives. “Here in France, they make caricatures about our pure and great Prophet Mohammad… Today, I will revolt against this,” the suspect said in the clip, as cited by the prosecutor.

The suspect surveyed the area at Rue Nicolas-Appert on three separate days before the attack on September 25, in which he used a meat cleaver bought several hours earlier.

He is believed to have stabbed two people outside the former Charlie Hebdo headquarters because he thought that they were some of the magazine’s staff members, Ricard pointed out. The victims were hospitalized, their injuries non-life-threatening.

What the cleaver-wielding assailant didn’t know, however, was that the satirical magazine had moved to an undisclosed location after it was subjected to an Islamist attack in January 2015. Twelve people were killed at its office by gunmen, angered by Charlie Hebdo’s publication of caricatures of the Islamic prophet.

The controversial drawings initially appeared in a Danish magazine in 2005, provoking protests across the Muslim world, as any depiction of the Prophet is considered blasphemous in Islam.

A month ago, Charlie Hebdo again published some of those cartoons, saying it was to mark the opening of the trial of those accused of being accomplices to the shooters of the 2015 attack. 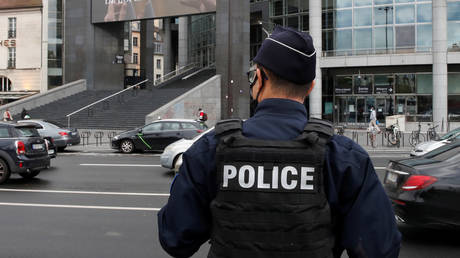