Palestinians have held protest rallies across the West Bank and Gaza, decrying the recent deal to normalize the ties between Israel and the UAE as a betrayal of their cause and a blow to “Arab solidarity.”

Protesters carried Palestinian flags and stomped on photos of Abu Dhabi Crown Prince Mohammed bin Zayed Al Nahyan and Israeli Prime Minister Benjamin Netanyahu, before setting them on fire in central Ramallah in the West Bank. They also burned photos of US President Donald Trump, who brokered the deal, and Palestinian politician Mohammed Dahlan, who currently resides in the UAE.

Similar demonstrations occurred across the West Bank and Gaza, as well as outside Al-Aqsa Mosque on the Temple Mount (Haram al-Sharif) in Jerusalem.

Most Arab states have historically refused to formally establish diplomatic ties with Israel, in protest over its occupation of the lands the Palestinians claim as their own.

Under the accord announced earlier this week, the UAE agreed to normalize relations with Tel Aviv in exchange for Israel suspending its plans to officially annex the West Bank. The UAE became the third Arab country to do so, after Egypt and Jordan.

The move was hailed by the US and Israel as a breakthrough towards greater peace in the region. The Palestinians, however, overwhelmingly denounced the deal, describing it as “treason” and “betrayal.”

Secretary General of the National Initiative party Mustafa Barghouti told RT’s Ruptly video agency that the agreement is “a stab in the back of Palestinian people.”

It actually violates Arab solidarity, agreed upon resolutions by all Arab countries.

The accord was similarly criticized by Iran, with President Hassan Rouhani labeling it “a huge mistake.” 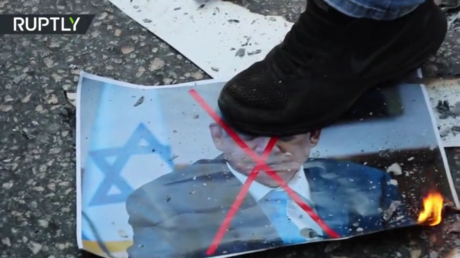 IDF carries out bombings of Gaza i...