Ambassadors from Palestine are being sent back to their posts in the United Arab Emirates and Bahrain, after being recalled in response to the Gulf states’ US-brokered deals with Israel, a Palestinian official said on Wednesday.

The announcement comes after the Palestinian Authority announced a day earlier that it would resume security and civil coordination with Israel some six months after President Mahmoud Abbas withdrew from all agreements in protest at Israel’s annexation plans for the West Bank.

On Wednesday, the first government delegation from Bahrain landed in Israel, amid thawing relations between the two states.

Al-Zayani announced that from December there would be 14 weekly flights between Israel and Bahrain, with a new electronic visa system to be introduced on December 1.

He also called for Israeli-Palestinian peace talks to resume.

“Let us achieve a peace that brings prosperity to the Middle East, we must work to solve the Palestinian-Israeli conflict, we call for the resumption of peace negotiations based on the two-state solution,” he said.

Bahrain and the UAE each agreed to normalize relations with Israel this year after they signed the “Abraham Accords” at the White House in September, in a deal brokered by US President Donald Trump.

Israeli Prime Minister Benjamin Netanyahu is set to host a tripartite summit with Al-Zayani and US Secretary of State Mike Pompeo on Wednesday.

News of the meeting drew backlash from the Palestinian National and Islamic Forces Committee, which called it a “clear attack” on Palestine. 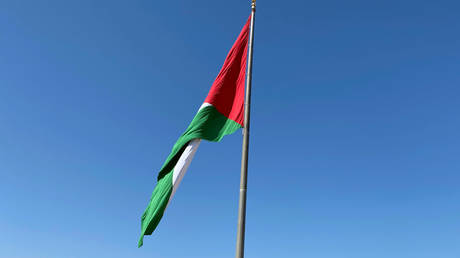