Former Prime Minister of Pakistan Nawaz Sharif and leaders of his party were booked in a sedition case on Monday, after police in Lahore registered a complaint against them lodged by a citizen.

The police report alleges that Sharif, 70, is involved in “conspiring” against Pakistan and its state institutions after making “provocative speeches” from his current residence in London.

“Instead of availing medical treatment in London, Nawaz is carrying out a planned conspiracy to malign the country and its institutions through hateful and provocative speeches,” according to the complaint filed with Shahdara Police Station.

The case has been registered under sections of the Pakistan Penal Code that include sedition and criminal conspiracy to wage war against Pakistan.

The police report also named his daughter, politician Maryam Nawaz, and over 40 other leaders of Sharif’s Pakistan Muslim League party (PML-N), who reportedly participated in its meetings last week.

The allegations claim that the former PM made speeches on September 20 and October 1 in which he attempted to promote India’s agenda to “keep Pakistan on the Financial Action Task Force’s (FATF) grey list,” as well as isolate Pakistan internationally.

PML-N and eight other opposition parties last month accused the country’s military of meddling in politics – and of rigging the 2018 elections that saw Imran Khan become prime minister.

A long-standing critic of the military, Sharif left Pakistan last November to seek medical treatment after being granted bail from a seven-year jail sentence for corruption. He denies the corruption charges.

The government claims the corruption cases against Zardari began during Sharif’s tenure.

Zardari’s Pakistan People’s Party and Sharif’s party have called for a rally against PM Khan in the southwestern city of Quetta on October 18. During his rule, Sharif was the target of similar protests by Khan. 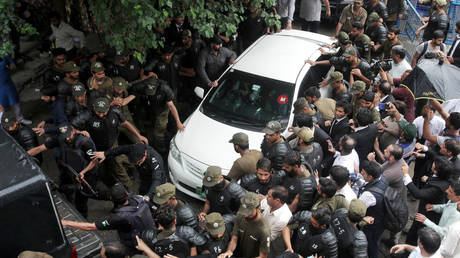 Beirut explosion was one of larges...