At least four police officers have been killed and hundreds more injured in massive clashes that erupted in Pakistan’s north-eastern Punjab province, as law enforcement sought to stop an Islamist protest march on Islamabad.

Punjab’s Chief Minister Usman Buzdar confirmed casualties on Twitter on Wednesday, saying at least four officers had been killed and over 250 people injured. There, law enforcement faced fierce resistance from the members and supporters of the banned Islamist Tehreek-i-Labbaik Pakistan (TLP) party as the police sought to disperse their march on the capital.

The TLP orchestrated the protests, demanding the release of one of its leaders, Hafiz Saad Hussain Rizvi, who has been in custody since April. On Wednesday, it also accused the government of “lying” about an agreement supposedly reached with the party to end the demonstrations.

Other demands included “respect for the Holy Prophet” Mohammed and the expulsion of France’s ambassador to Pakistan over the publication of “blasphemous” cartoons of the prophet by French satirical outlet, Charlie Hebdo.

Pakistan’s Interior Minister Sheikh Rashid Ahmed confirmed at a press conference that at least three officers were killed and 70 injured in the clashes, adding that eight are now in critical condition. He also said that he was sending the Rangers – a federal paramilitary force – to Punjab, adding that the local government may use the unit “wherever it wants.”

Federal Information Minister Fawad Chaudhry said on Wednesday that the government would from now on treat the party, banned in April, as a militant group and not a political force. “There is a limit to the state’s patience,” he said, adding that, although everyone has a right to express their ideas, no one can take up arms if these ideas are not heard.

“No one should make the mistake of thinking that the state is weak. Those who made this mistake later realized they were wrong,” Chaudry said, adding that Islamabad “will not tolerate those who challenge the writ of the state.”

The information minister also said that the government does not want “blood to be spilled,” and blamed the violence on the TLP.

Party members, meanwhile, told Reuters that some of their activists had also been killed and injured by the police. The group also accused Rashid Ahmed of “lying” about settling all the matters with the party, adding that no government officials had contacted them.

On Tuesday, Rashid said the government was willing to consider all the party’s demands, bar the French diplomat’s expulsion.

Authorities blocked roads leading to Islamabad on Tuesday night in a bid to prevent the marchers from entering the city. According to some Pakistani media, additional police could be deployed to the city and roads might be barricaded with containers and barbed wire.

Founded in 2015, the TLP is known for its hardline stance on Islam. It fiercely opposed any changes to Pakistan’s blasphemy law and demanded the nation adopt Sharia as its fundamental law. In 2018, it did not get into the Pakistani parliament but still received the support of more than two million people.

The TLP found itself on a collision course with the government in April 2021 when it organized protests to pressure Islamabad into expelling the French envoy. At that time, one of the party’s leaders – Rizvi – was arrested by the Punjab government to maintain “public order.” Several people, including police officers, were killed during the April unrest, though tensions eased after the government reportedly agreed to take the issue of the ambassador’s expulsion to the national assembly.

Though banned in April, the TLP was still allowed to contest elections. The government has engaged in talks with the party, which continues to demand the release of its leader and of another 1,400 activists. It also demanded the party ban be lifted and that the French envoy deported. 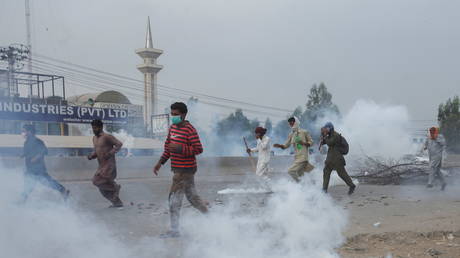 What a Kock up: Cricket South Afri...