Pakistan International Airlines (PIA) is grounding more than one third of its pilots over suspicions that they hold “dubious” licences. It comes after a deadly crash in May that left 98 people dead.

Around 150 of PIA’s 426 pilots will be grounded, after an initial inquiry into the horror crash in Karachi on 22 May was presented before Pakistan’s parliament by the country’s aviation minister, who also revealed irregularities at the national carrier.

The PIA Airbus A320 crashed in a residential area of the southern city of Karachi, killing 98 people and causing damage to dozens of homes. There were two survivors from the tragedy.

The preliminary report into the crash highlighted a range of errors by the pilots who were said to be so engrossed in a conversation about coronavirus that they disregarded three warnings that they were flying too high and attempted to land without engaging the plane’s landing gear.

The disaster came just three days after Pakistan had resumed flights, having halted all air travel in response to the pandemic. 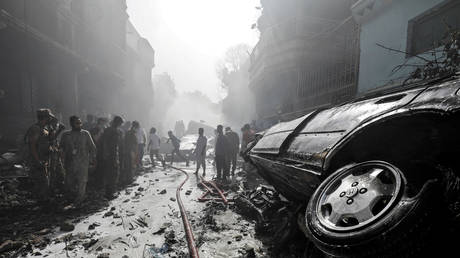