The World Organisation for Animal Health has reported a new outbreak of bird flu among backyard poultry in Lithuania. Suspicions were raised after the sudden death of several chickens and turkeys in the city of Kaunas.

Restrictions and monitoring zones have been put in place after the highly pathogenic H5N8 bird flu virus was found at a smallholding where 27 birds, including chickens, turkeys, geese and ducks were being kept.

The remaining live birds will be culled, and the farm cleansed and disinfected, officials said. The highly contagious form of avian influenza was confirmed after the animals’ carcass had been examined.

Specialists from the State Food and Veterinary Service will carry out further examinations in the monitoring zone to assess the extent of the virus’s proliferation.

Local media claim this is the first time that avian influenza has been detected in poultry, while a number of wild birds were diagnosed with this virus in 2017.

Bird flu, and H5N8 in particular, has heavily impacted Europe’s poultry industry in recent months with tens of thousands of chicken and turkeys having to be slaughtered in attempts to stop the spread.

This strain of avian flu has been detected before and is mostly likely spread by migratory birds.

The World Health Organization (WHO) considers the risk of transmission to humans low, but it “cannot be excluded.” This particular strain has not infected any humans worldwide to date.

Some strains of bird flu, though, can be particularly dangerous to humans. The WHO believes that the H5N1 strain has a mortality rate of around 60 percent but there is no evidence that the disease can be transmitted through eating cooked poultry. 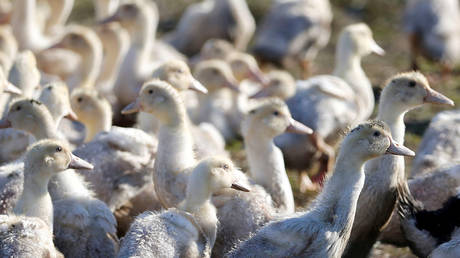 Denmark to roll out coronavirus ‘v...