Tourists could soon be barred from Amsterdam’s famous cannabis-dealing coffee shops as Mayor Femke Halsema, continues her battle to rid the city of its image as a drug and prostitution haven.

The patronage of coffee shops would be limited to Dutch residents only, according to the plan submitted by Halsema to Amsterdam’s city council on Friday.

“The residence condition is far-reaching, but I see no alternative,” the mayor told Bloomberg in an email. The move is aimed at tackling organized crime and hard drugs attracted by the marijuana trade, she pointed out.

The ban on foreigners is going to be a heavy blow for the industry, with the city head acknowledging that “coffee shops, especially in the center, largely run on tourists.”

There are currently some 166 coffee shops in Amsterdam, with a government survey finding that just 68 would suffice for satisfying the local demand in marijuana.

Halsema’s plan will now be debated in the council, with a transition deal with shop owners also on the agenda.

“We can be an open, hospitable and tolerant city, but also a city that makes life difficult for criminals and slows down mass tourism,” the mayor said, adding that she expects the restrictions to take effect next year at the earliest.

Before the pandemic put a serious damper on international travel, Amsterdam was often overwhelmed by tourists, with the city accepting around a million guests every month – about a fifth more than its permanent population. Visitors were drawn not just for the canals and museums, but also for accessible drugs and sex services in the Red-Light District.

Earlier this year, the mayor announced she would ban the display of prostitutes in brothel windows, saying that the practice was “humiliating” to women. In 2018, authorities also introduced on-the-spot fines for public urination, littering and other offences committed by tourists in the Red-Light District. 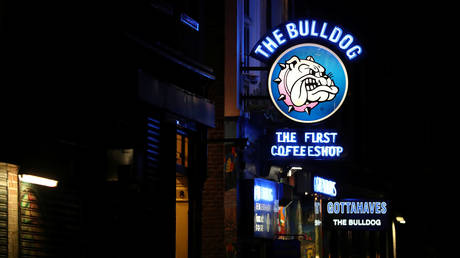 ‘I’d destroy both these versions o...