‘Out in their masses’: Madrid residents criticized for ignoring new Covid restrictions as Spain sees jump in cases

‘Out in their masses’: Madrid residents criticized for ignoring new Covid restrictions as Spain sees jump in cases

The country’s health ministry announced a new spike in Covid cases on Monday with 23,480 new infections added over the weekend, bringing Spain’s total to over 800,000 to date. The latest cases come just as residents of Madrid were spotted roaming around the city despite tough restrictions announced by the Spanish government on Friday.

The new rules include an 11pm curfew for bars and restaurants, and limit groups to just six people. They also permit only essential travel for work, school, health, or shopping. Some 300 municipal police officers were deployed at 60 checkpoints in Madrid over the weekend to enforce the new measures.

While Madrid re-emerged as Europe’s worst Covid-19 hotspot, with an average of 850 cases per 100,000, according to the World Health Organization, some social media users posted pictures of long queues of people outside the city’s restaurants.

Spanish journalist Rosa Villacastin wrote on Twitter: “It is not a mirage. Since the confinement of Madrid ordered by the Central Government, there are more people in the street; some terraces have put more tables out, crazy. Have we gone crazy?”

The latest restrictions, which affect some 71 percent of the region’s population – including 4.8 million people across the city of Madrid and nine of its surrounding towns – bar people from traveling between municipalities. However, some Spaniards accused Madrid residents of escaping the capital and heading down south “in their masses” to the Costa del Sol. Footage posted to Twitter on Friday appeared to show hundreds of commuters piling onto a train without practicing social distancing at Atocha Station, Madrid’s largest railway hub.

Meanwhile, a legal appeal by conservative-led regional authorities challenging the new restrictions over concerns for their severe economic impact was rejected at the high court on Monday.

Madrid’s hospitality industry has already registered an €8 million loss as tightened restrictions reportedly led to 75,000 table reservations being canceled over the last weekend. 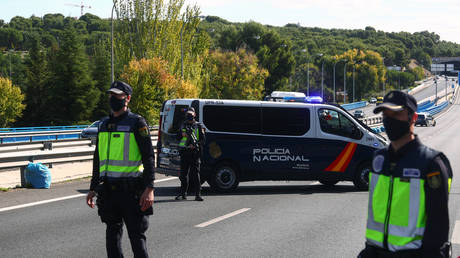