Hungarian Prime Minister Viktor Orban has defended his refusal to back down and compromise over the ‘rule of law’ provision in the EU budget, claiming the EU’s position is “only a political will” and can be changed.

Speaking on state radio a day after his meeting with the Polish leader, Orban said the two nations are united in their belief that the EU cannot attach the rule of law condition to funds without the bloc changing its founding treaty.

Our position is rock solid. Theirs is only a political will. Theirs can be changed. Ours cannot. I do not want a compromise.

He demanded that the EU should not link political debates to economic issues.

The Hungarian prime minister’s comments come a day after Belgian MEP Guy Verhofstadt criticized the “illiberal pressure” Orban and his Polish counterpart Mateusz Morawiecki are putting on the EU, declaring that the bloc will not play by their rules and water down the link between European values and the receipt of funding.

Morawiecki has stood by Orban’s criticism of the EU, releasing a joint statement with him that rejected any mechanism imposed by the bloc that would financially sanction member states if they violate democratic standards.

The dispute between the two countries and the EU was sparked after member states attempted to link the bloc’s €1.8 trillion ($2.1 trillion) budget, including a €750 billion ($894 billion) coronavirus recovery package, with a condition that only allows countries to receive funds if they adhere to democratic values, human rights and an independent judiciary.

Both Hungary and Poland are currently under investigation by the EU over allegations of undermining the independence of their judiciaries and the media, which, if proven, would prevent them, under the terms of the new budget, from receiving EU cash. However, without the provision, Hungary and Poland would be set to receive some of the highest funding per capita from the EU. 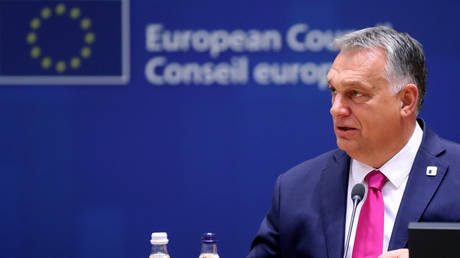