‘Our options are unlimited’: Iran vows tit-for-tat response if US enacts sanctions under nuclear deal it single-handedly upended

‘Our options are unlimited’: Iran vows tit-for-tat response if US enacts sanctions under nuclear deal it single-handedly upended

Tehran has vowed a swift pushback to the US if the Trump administration moves to trigger “snapback” sanctions envisioned by the 2015 nuclear deal, arguing that they would be “illegal” since the US pulled out of the accord in 2018.

The threat from the US to trigger a mechanism embedded within the 2015 nuclear deal, which allows a party to the accord to initiate a reinstatement of all UN sanctions against Iran, came after the Trump administration was dealt a major blow at the UN Security Council meeting on Friday, as none of its allies backed the Washington-championed resolution to extend a 13-year arms embargo on Tehran.

China and Russia, who have vocally opposed the extension, voted against, while the US’s European allies, France and the UK, abstained from the vote. Only one member of the 15-nation body, the Dominican Republic, backed the US-sponsored draft, while the rest likewise abstained.

Fuming at the refusal by all but one UNSC member to go along with its arm-twisting of Iran, US Secretary of State Mike Pompeo denounced such behavior as “inexcusable,” while US Ambassador to the United Nations Kelly Craft vowed to go to great lengths to invoke the ban.

“In the coming days, the United States will follow through on that promise to stop at nothing to extend the arms embargo,” she said, adding that the US “has every right” to impose the so-called “snapback mechanism” under the 2015 deal and which can be enacted if a party to the agreement deems Iran to be in violation of the agreement.

A day before the vote, the US reportedly sent a memo to UNSC members, attempting to persuade them that despite the US leaving the deal unilaterally in 2018, it still remains a participant of the landmark nuclear accord, which US President Donald Trump has repeatedly labelled “the worst deal ever.”

Iran argued that such sanctions would be illegal, pointing that the outcome of the vote had revealed Washington’s “isolation.”

“US must learn from this debacle. Its attempt to ‘snapback’ sanctions is illegal, and was rejected by [the international] community, as was evident today,” Iran’s UN Ambassador Majid Takht Ravanchi tweeted.

The diplomat noted that it would be up to Tehran to retaliate in kind when and if the US decides to follow through on its threat, saying that the “imposition of any sanctions or restrictions…will be met severely by Iran and our options are not limited.”

The United States and any entity which may assist it or acquiesce in its illegal behavior will bear the full responsibility.

With tensions between Tehran and Washington running high, Moscow has proposed to hold an online summit featuring Iran, Germany and five UN Security Council permanent members to map out the way to avoid the confrontation over the embargo, which is set to expire in October. 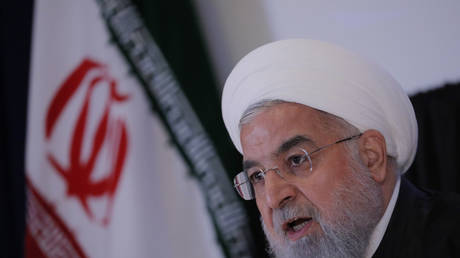