Italian nationalist Matteo Salvini has lashed out at his government for rolling back on the harsh migration rules that he’d introduced as interior minister. “We will stop them,” the high-polling politician promised supporters.

A decree, approved by the government late on Monday, drastically reduced the fine applied for aid groups who violate official orders during their marine operations to rescue migrants in the Mediterranean. The penalty, which stood at up to €1 million under Salvini, has been dropped to €50,000.

Asylum seekers who “risk being subjected to torture or inhumane treatment” in their countries won’t face expulsion from Italy anymore under the new regulations. The decree also simplifies the procedure for foreigners to obtain a regular working visa with special residence permits.

Salvini, who served as interior minister between June 2018 and September 2019, posted on Facebook to share his frustration with the move. “Instead of building, they destroy,” he said of PM Giuseppe Conte’s government.

Open ports (and wallets) for smugglers and illegal migrants are back.

“We will stop them… Italy deserves better,” he wrote. Salvini’s anti-establishment Northern League (Lega Nord) currently polls higher than any other party in the country. Research by pollster Index last week showed that 24 percent of Italians were eager to vote for Lega Nord.

Unlike Salvini, members of the current government rejoiced over the loosening of migration rules. “The propaganda/Salvini decrees are no more,” Nicola Zingaretti, who leads the Democratic Party (PD) in the coalition government, wrote on Twitter. “We want a more humane and safe Italy.”

“We’ve closed a dark page,” Agriculture Minister Teresa Bellanova said, adding that the move made it clear that those who arrive in Italy “fleeing wars, misery, climate disasters, are not our enemy and not an enemy of Europe.”

Italy became one of the main entry points for refugees after the emergence of the migrant crisis in 2015, but Salvini closed all of the country’s ports to rescue vessels, accusing aid groups of working together with human traffickers. He also made it much more difficult for those who still managed to get to Italy to receive asylum.

The 47-year-old is currently at risk of going to prison over his harsh treatment of migrants while in office. Salvini faces charges of abuse of power, over his alleged illegal detention of migrants aboard ships and refusal to allow them to dock. If found guilty, he could be sentenced to up to 15 years.

But Salvini has called the charges against him “a big gift,” saying that he will use the trial to clear his name and prove he was right. 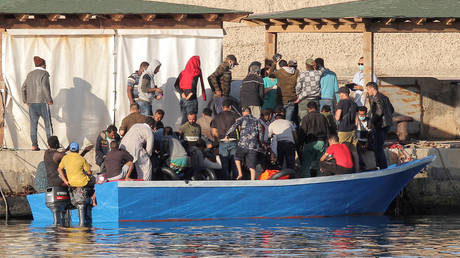