A planet-hunting satellite has observed one of the hottest exoplanets yet discovered, with surface temperatures so high they could turn metals to gas.

The European Space Agency’s (ESA) Characterising ExOPlanet Satellite (CHEOPS) spied the extreme exoplanet in question – which is named WASP-189b – some 326 light-years away from Earth.

Roughly 1.6 times the size of Jupiter, WASP-189b boasts an orbit of just 2.7 days around its star, with permanent day and night on opposite sides of the planet.

“It takes less than three days for it to circle its star, and it’s 20 times closer to it than Earth is to the Sun,” says astrophysicist Monika Lendl, of the University of Geneva, in Switzerland.

The planet’s host star is known as HD 133112 and is roughly 2,000 degrees Celsius (3,600 degrees Fahrenheit) hotter than our Sun, making it one of the hottest stars yet discovered that still has a planetary system around it. And this star is spinning so fast, it bulges out along its equator.

The space agency’s celestial sleuths were able to watch the planet disappear behind its star and then cross in front of it. This enabled them to figure out many of the planet’s characteristics, including its brightness, temperature, size, and shape.

“Only a handful of planets are known to exist around stars this hot, and this system is by far the brightest,” explained Lendl. “WASP-189b is also the brightest hot Jupiter that we can observe as it passes in front of or behind its star, making the whole system really intriguing.”

The discovery further proves CHEOPS capabilities, measuring the brightness of distance celestial bodies with incredible accuracy and in baffling detail.

The satellite will now shift its gaze towards hundreds of exoplanets of new, unexplored worlds as it categorizes super-Earth to Neptune-sized planets that might one day be considered candidates for colonization. 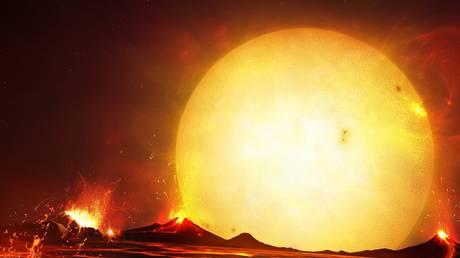 'They asked which role I play...