Vikas Dubey, a notorious gangster behind a string of murders, kidnappings, and extortions, was arrested by Madhya Pradesh Police after massacring 8 cops in an ambush and spending days on the run.

Dubey was apprehended after visiting a temple in Madhya Pradesh on Thursday. A shopkeeper happened to recognize the most-wanted man – who was peacefully buying prayer offerings – and reportedly called security guards who asked for his ID.

As the confrontation escalated, Dubey hit out at the guards who dragged him towards a police van. Footage from the scene shows the gangster being beaten and forced into the vehicle.

Murder-accused Vikas Dubey shouts at the top of his voice — Main Vikas Dubey hoo Kanpur wala — even as cops ask him to stay quiet while whisking him in a vehicle from Madhya Pradesh’s Ujjain to UP pic.twitter.com/xbVt81PnYd

Dubey’s name returned to Indian news reports – and police wires – earlier last week, when a squad of officers descended on his place in Kanpur, a metropolis in his home state, Uttar Pradesh. Dubey set up a massive ambush involving as many as 60 of his men – armed with assault rifles, and pistols.

The gangsters opened fire from rooftops, outnumbering and outgunning the police as around 30 officers arrived. Dubey himself managed to escape, while eight officers were killed.

A massive manhunt was unleashed shortly afterwards, and the bounty on the notorious gangster was raised to Rs 5 lakh (around $7,000).

Dubey’s gangster career started back in 1990, when the first criminal case against him was registered. By 2020, he faced 60 criminal charges, including counts of murder, extortion, kidnapping, and rioting.

“It is a big success for the police, Vikas Dubey is a cruel killer,” Madhya Pradesh Home Minister Narottam Mishra said, adding the police have informed their colleagues in Uttar Pradesh that the manhunt was a success. 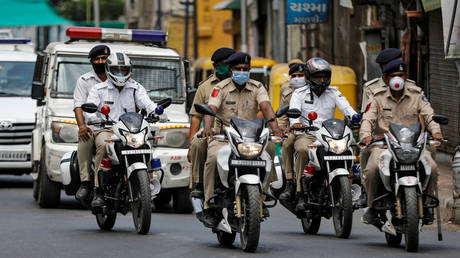