Dozens of US troops at two bases on the Japanese island of Okinawa have been confirmed infected with the coronavirus. Local authorities demand transparency from the Pentagon, and an adequate response to the massive outbreak.

Rigorous contact tracing and isolation of those infected had so far allowed the island prefecture to keep the number of confirmed cases at about 150, with only 7 fatalities. Overall, as of July 10, Japan reported about 20,700 cases and nearly 1,000 deaths.

Therefore, Okinawa Governor Tamaki Denny says local authorities were “shocked by what we were told” by the Pentagon about the scale of the latest outbreaks.

We have strong doubt about measures [taken by the US troops] to prevent the spread of the virus.

The US military demanded that the exact numbers are not publicly released, so Tamaki could only reveal that a “few dozen” new cases had been detected. Local media, however, reported there were at least 61 infections – including 23 at Camp Hansen and 38 at the US Marine Corps Futenma Air Station, the notorious base at the center of a relocation dispute and protests.

The Marine Corps Installations Pacific admitted in a FAcebook post that its personnel and their families at the two bases had been placed on “soft shelter-in-place” order after the installations “experienced two localized clusters of individuals who tested positive for the virus.” Okinawa authorities, however, demand full transparency from the US military, and asked Tokyo to request the Pentagon to clarify the scale of the outbreak and the containment measures it undertakes.

Back in March, admitting that the US military’s readiness and morale could be affected by the pandemic, Defense Secretary Mark Esper stated that the Pentagon would stop publishing precise details of Covid-19 cases within its ranks, apparently to avoid revealing ‘weaknesses’ to America’s adversaries.

Okinawa accommodates about half of the American troops stationed in Japan, to the great displeasure of many locals. In recent years, there have been protests against noise pollution, as well as the environmental impact and behavior of US soldiers, who have repeatedly been involved in sexual assaults and even deadly incidents on several occasions. 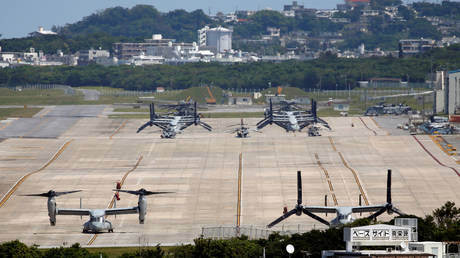