A Belgian farmer accidentally expanded his nation’s borders and violated a 200-year-old treaty with France after clearing a stone near his property. Thankfully, local officials believe war can be avoided.

The farmer, from the Belgian village of Erquelinnes, located on the border with France, reportedly moved a large stone 2.29 meters (7.5 feet) so that his tractor could pass through the area. Apparently unbeknownst to the man, the stone marked the France-Belgian border established in 1819.

The farmer allegedly also repositioned some of his fences, scooping up a small area of French territory.

French and Belgian officials were alerted to the marker’s incorrect location after a history buff surveyed the area with some vintage maps.

The marker was installed as part of the Treaty of Kortrijk, signed after Napoleon’s defeat at Waterloo in 1815.

Luckily, both sides of the territorial ‘dispute’ are not taking the treaty violation very seriously.

“I was happy, my town was bigger,” Erquelinnes’ mayor, David Lavaux, told French TV. “But the mayor of Bousignies-sur-Roc didn’t agree.”

“We should be able to avoid a new border war,” Aurelie Welonek, the mayor of the neighboring French village, joked.

The farmer has been asked to return the toe stone to its original location. If he refuses, officials have suggested, perhaps in jest, that the Belgian foreign ministry would need to get involved, which could in turn activate a Franco-Belgian border commission that has not met since 1930. 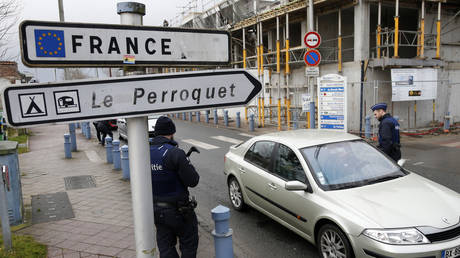