The Notre Dame spire in Paris will be rebuilt to its original Gothic design with no modern updates after it was destroyed in a massive fire last April, French President Emmanuel Macron has confirmed.

The national heritage and architectural commission in charge of the restoration approved plans to restore it to its original design after much speculation that the cathedral could have been redesigned in a modern style. The commission said it would be brought back to its last “complete, coherent and known” state.

Macron previously said he was in favor of a “contemporary gesture,” which inspired a number of outlandish proposals for a redesign, including putting a swimming pool on the roof. The plan is for the work to be complete by 2024, in time for the Paris Olympics, and a modernist rebuild may have delayed this deadline.

“The president trusts the experts and approved the main outlines of the project presented by the chief architect which plans to reconstruct the spire identically,” the Elysée palace said on Thursday.

The iconic cathedral was badly damaged in a huge fire in April 2019 while it was undergoing restoration works. Investigators believe the blaze was likely caused by an electrical short circuit.

The inferno caused an outpouring of international sympathy and a flood of pledges to donate money towards its restoration. The cathedral’s iconic spire collapsed as the structure burned, much to the horror of onlookers. It was originally built in the 13th century, but was replaced in the 19th century.

A new study recently revealed that six times more lead was released into the air in the massive blaze than had previously been thought, a discharge that could have lasting effects on people living in the area. 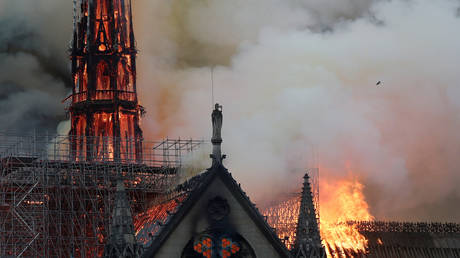 No blasts occurred outside Tehran...

Over 60 percent of travelers plan...

‘The Moscow 25’: Hardy band of Leicester fans make use of no-quarantine rule, head to Russia for seven-goal Spartak thriller