Mali soldiers who detained and ousted the nation’s president and government in a coup have announced that they will hold new elections. They also called on civilian and political movements to join them and facilitate transition.

The military said they staged Tuesday’s coup to prevent the Western African nation from “sinking into chaos,” and invited social and political movements to take part in creating the conditions for new elections.

“We are not keen on power, but we are keen on the stability of the country, which will allow us to organize general elections to allow Mali to equip itself with strong institutions within the reasonable time limit,” a spokesman for the military group calling itself the National Committee for the Salvation of the People said in a TV address aired by the state broadcaster.

There was no immediate reaction to the call from the opposition, although earlier it cheered the arrest of the president, Ibrahim Boubacar Keita, and prime minister, Boubou Cisse. Keita resigned and dissolved the parliament hours after his arrest, arguing that he did not want blood to be shed.

The mutiny in Mali followed months of anti-government protests sparked by economic crisis, perceived government corruption, and the authorities’ inability to deal with jihadist extremists active in the country’s north.The mutineers appear to enjoy public support. Footage published by the Ruptly video news agency showed crowds welcoming a military convoy as it drove through the streets of the Malian capital of Bamako.

The military putsch, however, has sparked concerns in the UN and the African Union. The Economic Community of West African States (ECOWAS) promptly suspended Mali’s membership following the coup and closed its members’ borders with Mali.

Germany also tightened security measures for its soldiers deployed to Mali as part of a UN stabilization mission, ‘Minusma.’ More than 900 Bundeswehr soldiers currently stationed in the West African nation “no longer leave their camp,” a spokesperson for the Bundeswehr operational command told German media.

Moscow, meanwhile, took a more reserved stance towards the events unfolding in Mali. “We are closely following the developments in Mali and analyze the information coming from there,” Kremlin spokesman Dmitry Peskov told journalists. “After the analysis is finished, we can give our assessment to the situation.” 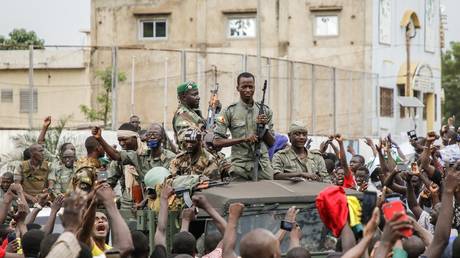