Close
Trending News
HomeWorldNot every incident in Iran ‘necessarily has something to do with us,’ Israeli defense chief says after fire at Natanz nuclear site

Not every incident in Iran ‘necessarily has something to do with us,’ Israeli defense chief says after fire at Natanz nuclear site

Not every incident in Iran ‘necessarily has something to do with us,’ Israeli defense chief says after fire at Natanz nuclear site

Israel’s defense minister has rebuffed speculation that Tel Aviv was behind the recent incident at an Iranian nuclear site. He reiterated, however, that Tehran’s nuclear program is a threat to his country.

Defense Minister Benny Gantz said that he was “not sure” whether Iranians always follow safety protocols on their strategic sites.

Everyone can be suspicious of us all the time. But not every incident that happens in Iran necessarily has something to do with us.

Gantz reiterated, however, that “a nuclear Iran” is a threat to Israel. “We will do everything possible to prevent Iran from spreading terror and weapons, but I do not refer to any individual event,” the minister said.

Tehran confirmed earlier this week that its Natanz nuclear enrichment facility was damaged in an unspecified incident. Imagery released by the country’s Atomic Energy Organization shows the damaged facility, with burn marks and apparently blown-off gates.

Iranian media and some officials have floated the idea that the site was targeted by a cyberattack from Israel or the US. The country’s authorities say they have already determined the true cause of the incident, promising to provide further details at a “convenient time.”

The Natanz incident came amid a series of incidents at Iranian strategic sites, including a blast at a weapons development facility outside Tehran.

Arch rivals in the Middle East, Iran and Israel often accuse each other of subversive actions against one another.

Officials in Tel Aviv have been saying that the Islamic Republic is lying about its nuclear program and blamed it for developing atomic weapons in secret. No solid proof for such accusations, however, has been provided. 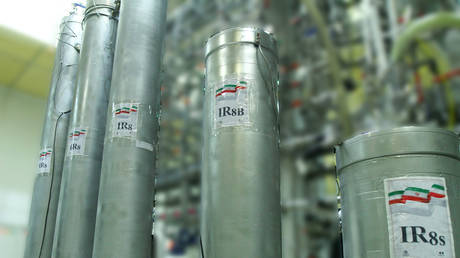