Turkish Cypriot Prime Minister Ersin Tatar said on Tuesday that beaches in Varosha in the northern part of Cyprus will open this week for the first time since the conflict of 1974 that led to the island’s division.

“Beaches in the long-abandoned town of Varosha in the northern part of Cyprus will open on Thursday,” Tatar said, after a meeting with Turkish President Recep Tayyip Erdogan in Ankara. They met for the inauguration ceremony of the Turkey-Northern Cyprus water pipeline after completion of repair work.

Varosha was a famous resort region in Cyprus, boasting more than 100 hotels, but has been closed since 1974, when Turkish military forces landed on the island following a brief Greek-inspired coup.

The eastern Mediterranean island has been split since the 1974 conflict. The internationally recognized Greek Cypriot government represents the whole island in the European Union, while the northern part of Cyprus is a Turkish Cypriot state recognized only by Ankara.

However, the government in Nicosia has warned that plans to resettle the ghost town could permanently derail reunification talks. The potential resettlement of people displaced during the 1974 conflict remains a point of serious contention among both communities on the island.

In February, Cyprus condemned any “illegal intentions to de facto acquire the Varosha region in Famagusta,” after the Turkish Bar Association organized a round-table meeting in the ghost town for the first time since 1974.

The United Nations Security Council warned in October 2019 against any action that could change the status quo of the island’s uninhabited territory. UN Resolution 550, adopted in 1984, “considers attempts to settle any part of Varosha by people other than its inhabitants as inadmissible, and calls for the transfer of that area to the administration of the UN.” 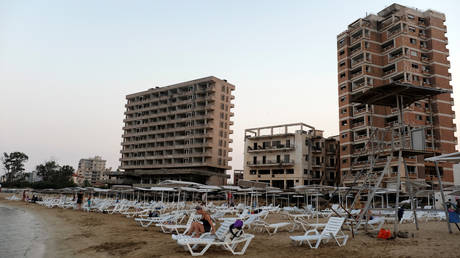