North Korean leader Kim Jong-un has said the country’s food situation is “getting tense” due to last year’s natural disaster. The “malignant virus” is also an issue, state media reported on Wednesday.

Speaking at the opening of a meeting of the ruling Workers’ Party on Tuesday, Kim Jong-un said the economy has shown an overall improvement, however, the people’s food situation is getting tense as the agricultural sector failed to fulfill its grain production plan due to damage caused by the typhoon last year, the North’s official Korean Central News Agency (KCNA) reported.

Heavy rain and severe floods left more than 20 people dead last year, according to the International Federation of Red Cross and Red Crescent Societies (IFRC), and severely damaged farmland and infrastructure. The party has vowed to direct all efforts to farming this year.

The North Korean economy, however, improved overall in the first half of 2021, with the total industrial output growing 25% from last year and huge growth made in terms of the actual amount of goods, Kim said, as quoted by KCNA.

A “protracted nature of the emergency anti-epidemic situation” was also reported to be on the party meeting’s agenda. Kim said “the urgent tasks” had to be carried out “at any cost” now that the world health crisis was worsening due to the “malignant virus”. He called for “strong discipline” in the prolonged struggle to “keep afloat the overall economy and for providing food, clothing and housing for the people.”

North Korea has not officially confirmed any coronavirus infections so far. The country imposed strict anti-virus measures, such as border closures and domestic travel restrictions.

Earlier this year Kim admitted “economic failure,” also blaming “a series of the worst of the worst unprecedented crises.” Speaking in January at the first congress of the ruling party since 2016, Kim Jong-un said the economic development plan fell “greatly short” of its goals, the North struggled due to natural disasters, sanctions, and the handling of the coronavirus pandemic.

In 2016 Kim announced his five-year economic goals, promising to build a “great socialist country” by 2020. The coronavirus pandemic last year forced Pyongyang to shut down the border with China, which is the North’s biggest trade partner, and bilateral trade plummeted by almost 80%.

The US-led international sanctions over its nuclear and missile programs also restrict trade and ban major exports from North Korea.

“The current international situation” will also be addressed at a meeting of the ruling Workers’ Party, reports KCNA. US President Joe Biden said in May that his goal was to achieve a “total denuclearization” of the Korean Peninsula, adding that he would meet with Kim to discuss his nuclear arsenal. 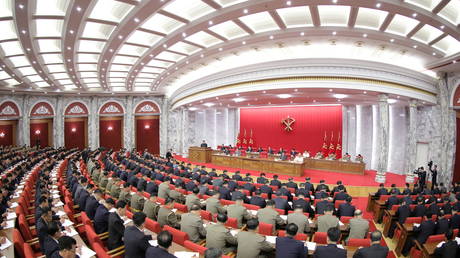