Pyongyang says it has halted plans for military action against South Korea, and has reportedly dismantled loudspeakers recently set up along the inter-Korean border amid a major spike in tensions over defector literature.

At a meeting on Wednesday, “the Workers’ Party of Korea evaluated the recent developments and suspended the plans for the South Korean military action proposed by the General Staff of the People’s Army,” KCNA reported.

Hostilities have soared between North and South Korea in recent weeks, sparked by complaints from Pyongyang that Seoul is not doing enough to stop defectors from sending anti-government pamphlets over the border into the North, often via large balloons.

Earlier this month, the North made good on threats to sever multiple lines of communication with Seoul over the dispute, and dramatically razed an inter-Korean liaison facility established in 2018, which was demolished with explosives. Vowing further retaliation, Pyongyang also warned that it would resume military drills in areas just beyond the Demilitarized Zone (DMZ) which had been disarmed in a 2018 agreement, even sending soldiers to reoccupy abandoned guard posts along the border.

Though it remains unclear what “military action” was decided-against during Wednesday’s meeting, party officials may have been referring to the proposed drills.

Later on Wednesday, some 10 loudspeakers recently reinstalled along the border to broadcast propaganda messages into the South were dismantled, Yonhap News reported, citing military sources. While no explanation was given for the move, it could suggest a further attempt at de-escalation after weeks of renewed tensions. 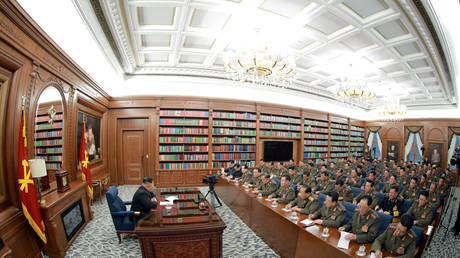