North Korea has rejected a shipment of three million doses of the Chinese-made Sinovac Covid vaccine from the international COVAX scheme, asking UNICEF to redirect them to worse-hit countries, the UN said on Thursday.

The Asian nation was among the first to introduce strict Covid restrictions as the pandemic began to spread in early 2020, locking down its border to prevent transmission from neighboring China. Pyongyang has claimed that it has not yet detected any cases of Covid within the country.

A spokesperson for UN agency UNICEF said that North Korea had rejected roughly around three million doses of a Covid vaccine, requesting that the COVAX scheme give them to poorer nations, which have reported greater case numbers during the pandemic.

The North Korean Public Health Ministry confirmed in a statement that it had rejected the doses, saying that the vaccines are being “relocated to severely affected countries in view of the limited global supply of Covid-19 vaccines and recurrent surge in some countries.” However, the country’s officials said they would “continue to communicate” with the COVAX scheme over receiving a shipment of doses “in the coming months.”

The World Health Organization’s (WHO) weekly report released on August 27 confirmed that “no case of Covid-19 has been reported” within North Korea, although 37,291 people have been tested with flu-like symptoms, returning negative coronavirus tests.

While North Korea claims it hasn’t had an outbreak of cases, it has suffered an economic and “food crisis” due to border restrictions, which have affected trade and travel with the reclusive country’s neighbors.

The decision to reject the Chinese Sinovac doses comes months after a South Korean think tank, the Institute for National Security Strategy, claimed that North Korea had refused a shipment of AstraZeneca vaccines over fears about potential side effects. 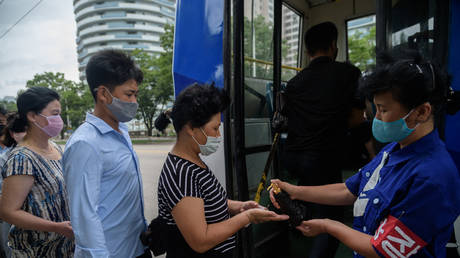 ‘It will never happen’: Snowden la...