‘None of it is true’: Russian biathletes sue Rodchenkov for libel over years-long doping scandal

‘None of it is true’: Russian biathletes sue Rodchenkov for libel over years-long doping scandal

Russian biathlete Olga Zaitseva and two other athletes have filed a defamation lawsuit against Grigory Rodchenkov – a disgraced doctor-turned key witness in the Russian doping scandal – saying he made up the whole story.

Zaitseva, a two-times Olympic champion, has been stripped of her Sochi 2014 Olympic silver and banned for life along with more than 40 Russian athletes after Rodchenkov named her among those involved in the alleged Russian “state-sponsored” doping program.

Now, the woman seeks to appeal this decision in the Court of Arbitration for Sport (CAS) in Lausanne, Switzerland, together with two other biathletes from the Rodchenkov list – Yana Romanova and Olga Vilukhina. The three also filed a $30-million lawsuit in New York against the former Moscow laboratory director, accusing him of outright slandering them for some personal goals.

Zaitseva says it was one man’s lie that ruined her reputation and career – and she has evidence to prove her innocence. Rodchenkov’s portrayal of events was a “made up story” from the very start, at least when it comes to her case, the biathlete told German weekly Der Spiegel.

The former Moscow laboratory head accused the athlete of almost literally every possible doping sin from boosting the number of red blood cells in her blood to enhance performance to taking the so-called “Duchess cocktail,” a mixture of three anabolic steroids Rodchenkov claimed to have invented himself.

“None of it is true,” Zaitseva told Der Spiegel while pointing to various inconsistencies in Rodchenkov’s account. He specifically said that he met the biathlete but she maintains she has never ever seen him personally in her life. Zaitseva’s coach, a Bavarian, Wolfgang Pichler, also dismissed Rodchenkov’s allegations against his charge.

“We were almost entirely under WADA’s control,” he said, explaining that his biathletes mostly trained in Europe anyway.The coach is known for campaigning against doping and dopers and has no soft spot for Russians. He was against the German Ski Association accepting former East German coaches suspected of involvement in doping schemes and called for banning Russian biathletes from Olympic games over doping violations back in 2009.

The statements Rodchenkov made about Zaitseva’s biography also do not hold up against criticism. He once stated that she ended her career in 2014 on nothing less than an “order” of the Russian Sports Ministry which allegedly could not hide her doping any more.

In fact, she did so in January 2015. Zaitseva herself explained her decision by saying she was pregnant. Her second child was born in October that year.

Was there any tampering?

Some hard evidence seen by Der Spiegel also appears to support Zaitseva’s claim. Four doping samples were taken from Zaitseva at the Sochi Olympics – one blood and three urine. It was the urine samples that Rodchenkov claimed were tampered with. Yet, the blood sample, which stayed intact, was subsequently re-examined by the International Olympic Committee and proved to be negative.

As for a urine sample, which contained a somewhat high concentration of salt, Zaitseva said it was due to her high-sodium diet and not some drugs. Two expert opinions, including one from a reputable New York institute, submitted to CAS appear to support this claim.

A mysterious “man’s DNA” found in one of her 2014 urine samples – a fact used as proof of alleged tampering – was in fact that of her husband and resulted from the couple apparently having sex shortly before the test, Der Spiegel says, citing some “forensic report” it had seen.

Now, Zaitseva, together with her two fellow biathletes, awaits the CAS ruling on her appeal. The court heard her case back in March but has not passed judgement yet. The lawsuit the three filed in the New York court has also been frozen for a while as the sides agreed to wait for the CAS decision.

Zaitseva hopes that a CAS ruling in her favor would help her win the libel case against Rodchenkov as well. The doctor’s lawyer, Jim Walden, clearly thinks otherwise and appears to be quite optimistic about his client’s prospects in court.

“This lawsuit by the Russians has zero chance of surviving, whether CAS upholds the findings of doping or not,” he told Der Spiegel. Rodchenkov, who has become a cherished “whistleblower” in the US and was even included in the American witness protection program, is still unlikely to lose his status in the US.

The US House of Representatives already approved a bill bearing his name that would allow Washington to prosecute anyone it deems involved in doping aimed at “influencing a major international sport competition,” in which American athletes participate.

Yet, it also seems that Washington would not enjoy much support from its allies in its efforts to become the new world doping police, not least because of Rodchenkov’s eroded credibility. The man’s narrative took a major blow back in 2018 when CAS reversed the life bans of 28 Russian athletes out of 43 named in his list. If Zaitseva and her co-appellants are successful, this number would grow to 31.

Meanwhile, even Germany’s Der Spiegel – an outlet usually not known to be overly critical of Berlin’s allies across the pond – has called the US’ ambitions in doping regulation “ironic” and pointed to America’s habit of looking the other way when its own athletes fall under suspicion. 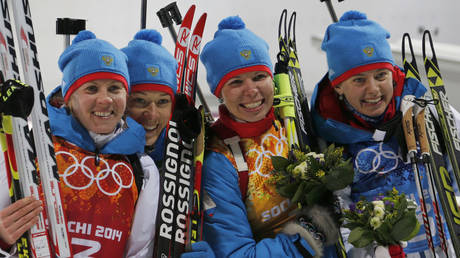