Thousands of people marched through central Berlin protesting the lockdown measures taken by the German government due to the Covid-19 pandemic, which they say violate their “human rights.”

A loose column of demonstrators stretched along several major streets of the German capital as they slowly walked from Konrad Adenauer Square in the western part of the city to the Victory Column in the central Tiergarten Park and near the iconic Brandenburg Gate.

Dubbed the ‘Silent March’ by its organizers, the demonstration was nevertheless held with the slogan ‘We have to speak out!’ displayed on a large banner that a group of protesters marching at the helm of the procession were carrying. Apart from that, there were hardly any signs, as the organizers urged them to leave all flags, banners, and even clothing with slogans printed on it at home.

“We are a colorful mix of… people from various ethnic and income level groups, who left all their political affiliations behind and who disagree with the politicization of the coronavirus [pandemic] resulting in restriction of our human rights,” the organizers said in a statement ahead of the march.

The protesters say the situation with the virus merits a broader public discussion and demand an end to the “permanent fear campaigns” they say the government has launched.

The organizers initially expected up to 20,000 to turn out for the march. According to the police, the actual number was significantly lower, amounting to “several thousands.” Still, 200 officers were deployed to maintain order.

The march went ahead peacefully, as there were no reports of incidents during the demonstration. However, on the sidelines of the protest, police arrested Attila Hildmann, a controversial “vegan influencer”. The reasons for his arrest are unclear.

Hildmann attended the march without a mask and chanted political slogans. German media said he compared the lockdown measures in Germany with the infamous Guantanamo prison when police asked him to put a mask on.

In contrast to many other rallies held by lockdown opponents in Germany, the protesters apparently decided to stick to social distancing rules, as many were seen wearing masks, while the organizers urged participants to keep a 1.5-meter distance between each other.

The rally came just a day after Chancellor Angela Merkel agreed to a set of tighter anti-coronavirus restrictions with the German mayor amid the rising number of new infections. The new measures involve stricter rules on mask-wearing and curbs on private social gatherings.

The Saturday demonstration stood in sharp contrast to the massive anti-lockdown protest the German capital saw in late August when 38,000 people hit the streets. That protest saw multiple clashes between demonstrators and police, and ended up with a group of far-right radicals and particularly disgruntled protesters attempting to “storm” the national parliament building.

Although the would-be assailants only managed to briefly occupy the stairs leading to the entrance, the incident sparked a nationwide stir and was vehemently condemned by politicians from across the political spectrum. 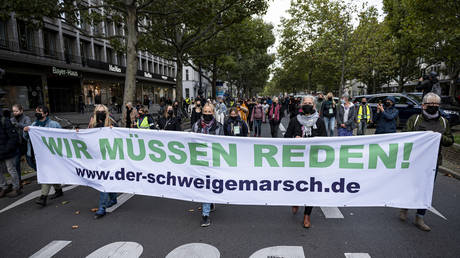 At least 3 killed as gas explosion...