‘No place for Lenin?’ Monument to Russian revolutionary erected in German town despite vehement opposition from city authorities

‘No place for Lenin?’ Monument to Russian revolutionary erected in German town despite vehement opposition from city authorities

A small German party has installed a monument to the first Soviet leader, Vladimir Lenin, in the western city of Gelsenkirchen. City authorities sought to block the initiative but ended up launching an online educational campaign.

The former West Germany has seen the very first monument to Lenin erected on its soil on Saturday, courtesy of a tiny fringe party, the Marxist-Leninist Party of Germany (MLPD). The party proudly unveiled the over two-meter (6.5-foot) tall statue, originally produced in the former Czechoslovakia in 1957 and now placed outside of its office in Gelsenkirchen.

The MLPD told the crowd of its red flag-waving and cheering supporters it was the right time to erect a monument to the “ahead-of-his-time thinker of world-historical importance and an early fighter for freedom and democracy” as Europe and the US are engulfed in a drive to get rid of its “dark past.”

“The time for monuments to racists, anti-Semites, fascists, anti-communists and other relics of the past has clearly passed,” MLPD chairwoman Gabi Fechtner said, as anti-racism protesters in the US and some parts of Western Europe are demanding removals of all monuments to any historical figures deemed racist by demonstrators.

The event sparked some counter-protests attended by some far-right activists, according to the police. Yet, all the rallies went peacefully, the law enforcement said.

The move also certainly did not sit well with the local authorities. A city district council staunchly opposed the initiative, arguing that “Lenin stands for violence, repression, terrorism and horrific human suffering.” The councilors vowed to use “all legal means” to block the installation since they would never “tolerate such an anti-democratic symbol in [the] district.”

And they did just that by taking MLPD to court over the statue. The regional court in Muenster dismissed their claim that the statute would interfere with a historic building on the same site and greenlighted the installation, though.

The local authorities have, meanwhile, changed their tactics and apparently decided to educate the people about the horrors of communism. They launched an online campaign ‘No place for Lenin’ on their YouTube channel, which features historians, public figures and various activists telling the viewers about the dark pages of the Russian revolution and the “violent” communist “onslaught” in Europe.

Lenin’s legacy includes the 1917 revolution followed by a bloody civil war and the creation of the Soviet state he didn’t live to see becoming a superpower. Germany might have more to do with the controversial historical figure than it would like to admit though.

The then-imperial authorities in Berlin actually supported Lenin and his fellow revolutionaries seeking to weaken the Russian Empire, its adversary in World War I. And they did gain in the 1918 Brest-Litovsk peace agreement signed by the Lenin government and the Germans which was vastly beneficial to Berlin and allowed it to seize most parts of modern Ukraine as well as Estonia and Latvia – formerly parts of the Russian Empire.

Yet, Berlin’s role in Lenin’s ascent to power does not spark any uproar in modern Germany and none of the commentators on Gelsenkirchen’s YouTube channel, who extensively describe the horrors unleashed on the world by Lenin, even mention it. 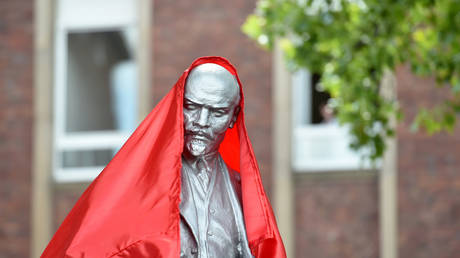