Close
Trending News
HomeWorld‘No one had seen anything like this’: Rogue star suspected as scientists see black hole’s corona disappear & rebuild in real-time

‘No one had seen anything like this’: Rogue star suspected as scientists see black hole’s corona disappear & rebuild in real-time

‘No one had seen anything like this’: Rogue star suspected as scientists see black hole’s corona disappear & rebuild in real-time

For the first time in human history, astronomers have observed the corona of a black hole at the center of a far-off galaxy disappearing completely, before appearing to rebuild itself, all in real-time.

A black hole’s corona is a mass of ultra-hot particles in the periphery of the darkness, which produces an X-ray glow so bright that it can be seen 300 million light-years away on Earth.

These coronas have been known to vary in brightness by a factor of 100 as the black hole feeds, but freshly released research has shown that two years ago the black hole in the center of galaxy 1ES 1927+654 faded by a factor of 10,000 in around 40 days, before becoming 20 times brighter than it had been originally just 100 days later.

Experts say brightness changes on this scale should usually take place over many thousands, if not millions, of years. The sudden disappearance of light likely means the black hole’s food supply was cut off, according to a new study on the extraordinary phenomenon.

The team of astronomers hypothesize that a runaway star got too close to the black hole and, as it was torn apart by the tremendous gravity, its stellar debris may have crashed through and ricocheted off the black hole’s corona and dispersed the gas.

“When we saw it was real, it was very exciting. But we also had no idea what we were dealing with; no one we talked to had seen anything like this,” explained the study’s lead author Claudio Ricci, from the Diego Portales University in Santiago, Chile.

Observatories noted that a few months before the black hole went dark, its disk brightened considerably, which may have been the point of impact of the stellar debris.

To make absolutely sure, they requested follow-up monitoring of the black hole using NASA’s Neutron Star Interior Composition Explorer (NICER) on board the International Space Station, which made 265 observations over 15 months.

Additional studies were carried out at observatories around the globe, in a variety of wavelengths, to further validate the hypothesis, allowing the scientists to monitor this entire event in unprecedented detail.

“This dataset has a lot of puzzles in it,” said Erin Kara, an assistant professor of physics at the Massachusetts Institute of Technology and a coauthor of the new study. “We think the star hypothesis is a good one, but I also think we’re going to be analyzing this event for a long time.”

This kind of research helps improve our understanding of how black hole coronas are heated and powered in the first place, as scientists observed one reconstituting itself after an apparently massive trauma.

Researchers now wonder if the black hole will return to baseline or whether it has been fundamentally changed by the event. It also raises questions about the black holes believed to be at the center of pretty much every major galaxy we know of. 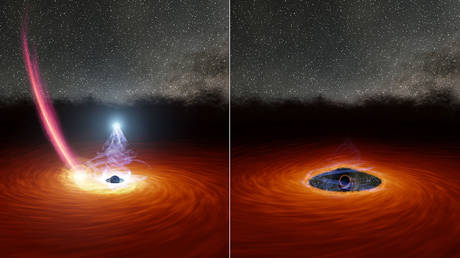