‘No new elections, unless you KILL ME’: Defiant Lukashenko confronts enraged workers as key industrial sites erupt in strikes

‘No new elections, unless you KILL ME’: Defiant Lukashenko confronts enraged workers as key industrial sites erupt in strikes

The president of Belarus, who won his sixth term in last week’s controversial election, had a rough face-to-face with striking workers in Minsk, telling them the vote is a done deal – at least as long as he is alive.

As massive anti-government rallies linger across Belarus, Alexander Lukashenko – the long-serving president who the opposition accuses of rigging the recent election – tried to win the hearts and minds of workers at MZKT, a key factory manufacturing an array of wheeled haulage trucks, including for the military.

The people amassed in front of the podium this Monday were seemingly unhappy about Lukashenko’s appearance. “Go away!” they repeatedly chanted, but couldn’t make the stubborn president budge.

“Thank you. I’m answering this question – you could yell some more,” Lukashenko told the crowd, with no sign of nervousness in his voice. The embattled president rejected the opposition’s calls to hold a new “fair” election – even to the extreme.

We have held the election. There will be no other elections, as long as you don’t kill me.

He told those gathered there that it was him, the “bad president,” who kept the jobs at the plant so that people “would not be thrown out into the street.” However, it all fell on deaf ears, and Lukashenko had to shorten his visit after being repeatedly interrupted.

‘No new elections, unless you KILL ME’

As he spoke, a large column of workers from two other plants set out for MZKT, possibly to reinforce their striking colleagues, but Lukashenko had already left the plant before they arrived.

The president’s public appearance comes as nationwide outrage over the results of the election has spilled over onto Belarus’ industrial sites. By Monday, an array of key factories have either halted or limited their operations due to striking.

Among them are renowned truck-making giant BelAZ, Minsk-based carmaker MAZ, as well as Belaruskali, the country’s largest exporter of potash fertilizers, to name a few. There have also been reports of strikes at state-owned television network NGTRK.

Belarus’ opposition media was quick to describe the events as a nationwide strike – but the government downplayed the scale, insisting that only a tiny share of workers were taking part. 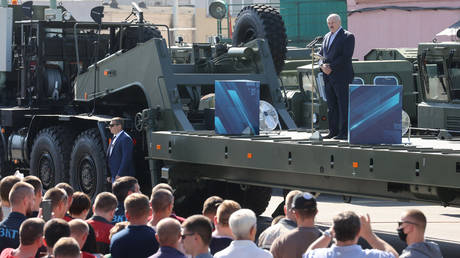